Tully on top of the world once more

The Roscommon/Dublin combination have been very successful in the last few years and their teamwork was plain to see in the first game, which they took 21-5.

The Galway/USA combination improved in the second game but it wasn’t enough as it went DCU’s way, 21-17. Ciana had earlier beaten Fiona in the singles final 21-11, 21-3, where the difference in fitness really told in the second game. 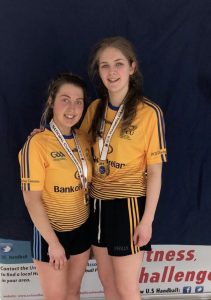 DCU students Fiona Tully (St. Coman’s, Roscommon town) and Meadhbh Ní Dhálaigh who won the USA Colleges Open Doubles title in Texas, continuing an extraordinary partnership that has seen them win eight out of the nine colleges titles on offer in both Ireland and the USA over the last three years.