‘We need to be competitive all over the pitch’ – Tully

Being competitive in every position on the field holds the key to capturing Connacht U-20 silverware on Saturday next, according to Roscommon manager Liam Tully.

Roscommon were last provincial U-21 champions in 2015 when they beat Galway, 3-14 to 3-11, following a thriller at Tuam Stadium, and Tully is expecting another cracking game of football between two good footballing sides at the same venue next weekend.

“I’m expecting this final to be very competitive. We like to play football, and it’s in the DNA of Galway teams to express themselves too.

“But our performance against Sligo wouldn’t be good enough to be competitive in a Connacht final, let alone winning it. We have to be competitive all over the field. If we are, then the result will reflect that. That’s the challenge for us,” he asserted.

Roscommon have injury concerns over Paul Carey, John Martin, Ruairi Smith and Orin Walsh ahead of Saturday’s final but, in general, Tully feels that his squad are in a better place after their 1-11 to 1-8 victory against Sligo at Markievicz Park, albeit the poor weather has made preparations for the final challenging on a number of levels.

“I think we were a little nervous going into the Sligo game. We were good early on but Sligo tested us, in every respect, after that.

“The performance wasn’t near good enough but we’ve done a lot of work on our ball retention and shot selection since that.

“Of course it hasn’t been easy with the weather. After the Sligo game, you’re gearing up for a Connacht final a week later, and then you have to revert back mentally when it’s put back a few weeks.

“There has been a lot of uncertainty, even when it comes to pitch availability, but I’m sure there are other counties in the same boat. In general, we have made good use of the extra time,” he explained.

Tully isn’t interested in drawing comparisons from 2017 as they are only a few players from both sides, especially Galway, involved.

“Galway have the pedigree. They’ve been in the last two All-Ireland finals at U-17 level. We know what’s coming at us.

“But we have some good players too, so it’s anybody’s game as long as we perform. All we can do is compete and see where it takes us,” he continued.

Beating Sligo was all about the result, but Tully knows that more will be needed on Saturday.

“We’re under no illusions. But the lads are really looking forward to this game. You can sense that they’re up for it. I’d be worried if that wasn’t the case.

“It’s a Connacht final and they won’t play in too many Connacht finals throughout their careers. You can sense that it’s a big game. There’s huge competitiveness within the group. It will be very difficult to pick the final 24,” he admitted.

Being more specific, Tully pinpoints Roscommon’s use of possession as central to his side’s prospects. Any of the lethargy that creeped into the performance in Markievicz Park will be punished severely.

“That’s the quality Galway have. Sligo were a good side but Galway will be more ruthless if we make mistakes. We’ll have to be at the top of our game to have a chance.

“But I think that we will get that performance. These lads have a lot of football played, in big games with their schools and clubs. They’ve worked hard and they’re looking forward to getting out there and producing a big performance. Both teams have some really good footballers, and the side that performs on the day will probably end up coming out on top,” he concluded. 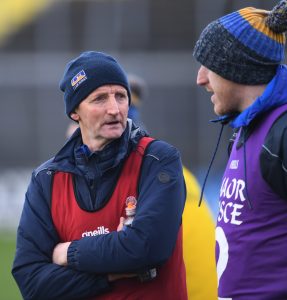 Roscommon U-20 football manager Liam Tully knows that his side must improve for Saturday’s Connacht final showdown against Galway at Tuam Stadium. Picture: Gerard O’Loughlin