Galway retained their Connacht U-20 football title with a landslide 4-13 to 0-5 victory against an out-of-sorts Roscommon side at Tuam Stadium on Saturday afternoon.

Given the margin of victory, many Roscommon supporters left the rain-sodden Galway venue wondering how a team, that looked good on paper at least, could be so out-classed by a rampant home side that didn’t have to get out of second gear for their success.

Roscommon made it easy for them, failing to get to the pitch of the game from the outset despite playing with a strong breeze at their backs.

As the first quarter meandered towards a conclusion, the sides were deadlocked at 0-1 apiece — Ciarán Lawless opening Roscommon’s account from play after a minute.

But when Man of the Match Cathal Sweeney was allowed to ghost through the heart of the Roscommon defence, playing in Alan Greene who set up Tomo Culhane for the game’s opening goal, the writing was on the wall for Liam Tully’s side.

It quickly got worse, as Greene and Culhane set up marauding wing-back Cian Monahan for his side’s second goal.

Despite points from play by joint captain Paul McManus and full-forward Darragh Walsh, Roscommon trailed by 2-3 to 0-4 at the break.

As if things couldn’t get any worse, Galway hit an unanswered 2-6 by the end of the third quarter to quickly put the game to bed.

Ryan Monahan netted a third goal in the 33rd minute, after he reacted quickest to Matthew Cooley’s effort that came back off the post. Then, to rub further salt into Roscommon’s wounds, a speculative shot from Galway defender Jonathan McGrath slipped through goalkeeper Daniel Connolly’s hands and into the net.

It was that kind of day, and one that raises many questions about where Roscommon are at in the area of coaching and player development, having enjoyed unprecedented success during the last decade. 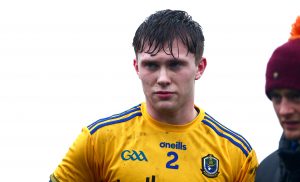 NOT OUR DAY: Roscommon defender Pearse Forst is left to contemplate where it all went wrong against Galway at Tuam Stadium. Picture: INPHO/Tom O’Hanlon