The Roscommon intermediate ladies’ team’s league aspirations for 2020 were all but ended on Sunday afternoon when Kildare inflicted a 0-13 to 0-8 defeat on the home side at Dr. Hyde Park.

The home side, despite a bright start, were always playing catch-up as the visitors established a 0-7 to 0-3 interval lead, albeit with the aid of a strong breeze.

But Roscommon couldn’t make inroads with the elements at their backs after the break, leaving Kildare as five-point winners with a probable place in the league final secured against Down.

“The best team won. To be fair to Kildare they were solid throughout and we never really got going from an attacking point of view.

“Defensively, we were okay. They scored 0-13 and we felt that we’d be able to score more than that. But we were poor up front and we coughed up possession too often,” reflected manager Michael Finneran.

“We have a very good goalkeeper and you’d expect her to pull off those type of saves. Going forward, we had a lot of nearly moments. If the final pass had stuck, we might have been through on goal. But I can’t argue with a five-point loss from our point of view.

“We’re stretched with a lot of injuries,” admitted Finneran.

“We’re down six girls that would have expected to start to today, and that’s on top of the five starters we’re down from last year. So that’s 11 front line players we don’t have.

“So it’s a big ask on our young players. They’ve done well throughout the league but maybe it’s expecting too much to rely on them against a very strong team like Kildare,” he conceded.

Finneran has openly stated that Roscommon need to be playing at a higher level to make championship inroads, although he hoped that the return of key players from injury would make his team a much stronger proposition in a few months’ time.

“The next step forward for Roscommon ladies’ football will be progression in the league. That will have to be the big aim next year. We had little room to manoeuvre after the Down game a few weeks ago. We knew that only the top two went to the final, so that’s probably gone from us now.

“We’re just going to have to hit the reset button. There might be an advantage in being able to focus on the championship from a bit further out. But we need our injured players back. If we can manage that, we’ll be quite strong in the championship,” he concluded. 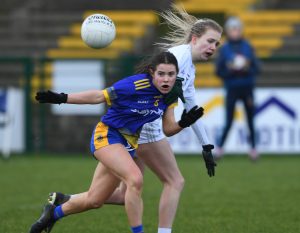