The last time Armagh and Roscommon met, they played out a sensational 2-22 to 1-19 thriller that was deemed to be one of the best games played in the 2018 championship.

The stakes aren’t quite as high on Saturday but there’s still plenty to play for as the Rossies get set to travel to meet Armagh in a top of the table league clash, and Armagh’s All-Ireland winning corner-forward Oisín McConville believes that the home side might have been better suited to playing the swashbuckling 2018 Rossies instead of Anthony Cunningham’s current side.

“This Roscommon team is able to win ugly, they’re far more difficult to break down and there’s clearly a lot more steel about them,” was how the Crossmaglen man described Armagh’s opponents this weekend.

“Armagh have struggled against teams like that. They tend to prefer when it’s a lot more free-flowing. From numbers eight to 15, Armagh are in great shape, but behind that, there are problems, as we’ve seen a couple of times this year,” he continued.

McConville tipped both Armagh and Roscommon to secure promotion at the start of the year and while both counties have wobbled on a couple of occasions, he still feels that they’re the two leading candidates to take their place in the top tier in 2021.

“This division has been extremely competitive with a lot of strange results, but I think that’s a reflection of the massive price that two teams will have to pay for finishing in the relegation zone at the end of it. There’s been a nervousness about everyone at different stages, and while I always expected Roscommon and Armagh to be top of the table, I didn’t expect either county to take such a circuitous route to get there.

“Armagh were exceptional against Cavan, they played some fantastic football that night, and then they followed that up with a dreadful performance against Laois. They were very poor for 20 minutes against Kildare and it seemed like they were going to be under real pressure after half time playing into the wind, and then they went on to finish the first half well before producing a great display after half time.

“Against Westmeath we conceded 3-5 in 15 minutes, but otherwise played very well, so it’s been a mixed bag, and Roscommon have been the same. There’s a lot of similarities about the two counties, but I suspect that given Armagh’s strong home record, we might just edge it,” was his overall verdict.

The topic of counties bouncing up and down between Division One and Division Two came up when McConville appeared on RTE’s Allianz League Sunday highlights programme, and he spoke about how a deep panel and deeper pockets were crucial for any county hoping to put together a run of seasons in the top tier.

“Roscommon and Cavan have bounced up and down in recent years and this year we’ve seen Meath go up and then come straight back down at the first attempt. There’s no doubt it’s very demoralising as it’s not just about losing games. It’s that every week you’re getting a reminder of the amount of ground you still have to make up on the top sides,” he told the Roscommon Herald on Monday.

“When you look at the very best sides that are playing up there consistently, they have great fitness, great physique, and you do need huge financial clout behind you.

“Having a good panel is crucial as well. Armagh have a good team this year but after the first one or two subs, the quality isn’t there and it’s the same in Roscommon and all the teams at this level. If you pick up a few injuries you’re in real trouble.

“Of course the players would have to go up there with the belief that they could win three games and stay up, but right now there is a gulf there. Maybe some Division Two teams should be careful what they wish for,” he concluded. 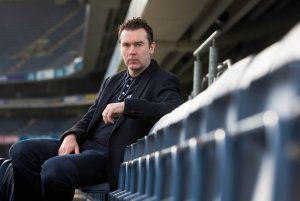 Former Armagh forward Oisin McConville is tipping his native county to just about edge out Roscommon on Saturday evening next. Picture: INPHO/Cathal Noonan