Dave Purcell’s well-drilled and disciplined side played against a strong wind in the opening half, and would have been delighted to keep the Ballina school pointless.

It was no surprise that defences dominated that scoreless opening half, although CBS still needed to come out and get points with the elements now in their favour.

Seventeen minutes into the new half, they did just that when Eoin Kelly spotted a gap in the Muredach’s rearguard and powered over. DJ Hession nailed the difficult conversion, and suddenly CBS had some breathing space.

Nine minutes later, the gap was widened when fantastic hands by Hession released Tadhg Lyons and his applied the after-burners to dot down in the corner to make it 12-0.

To Muredach’s credit, they responded almost immediately through a Seán Neary try but despite putting tumults of pressure on the CBS line late on, they couldn’t make further inroads as the Roscommon town school held on for their second Connacht Junior Cup title in five years.

Captain Ciarán Purcell lifted the cup amid great celebrations as Roscommon CBS confirmed their arrival as one of the top rugby schools in the province. 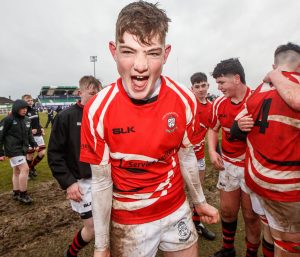