‘Wait and see’ for London game

The Connacht GAA Council continues to adopt a “wait and see” approach regarding the start of this year’s provincial senior football championship.

The restrictions imposed by Covid-19 means that GAA activity will not resume until March 29th at the earliest but there is growing speculation that the current ban could be extended far beyond the end of the month as a result of the escalating spread of the virus.

With Roscommon scheduled to play London in Ruislip on Saturday, May 2nd, and Galway taking on New York in Gaelic Park a day later, the likelihood of these games taking place on those dates is receding with each passing day.

“At the moment, it’s a case of wait and see,” Connacht Council Secretary John Prenty told the Herald on Monday.

“We’re receiving good advice from the relevant authorities and we have to abide by that. I think we’ll have a clearer picture next week in terms of where we’re going,” he said.

Mr Prenty agreed that all options would have to remain open, including a knockout championship in both football and hurling this season, if restrictions remain in place, but he insisted that it was too early to say what might happen further down the line.

“Obviously we’re going to have to make decisions about the New York and London games soon, but I think we’ll know more next week.

“We have Connacht Minor Football Championship games scheduled for May as well. We can revert to straight knockout there if we have to. Our senior championship is linked into the structures of the All-Ireland series, so we’ll have to possibly start looking at alternatives from next week onwards, depending on what we’re told,” he explained.

However, the Connacht GAA Secretary was heartened by stories he was hearing from around the province about GAA clubs helping out their local communities.

“There’s no better community than the GAA to come together in a time of crisis. It’s wonderful that clubs are getting out there and helping people. It’s great to see,” he concluded. 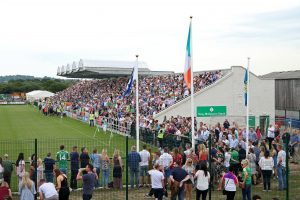