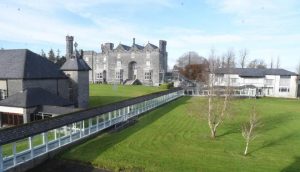 The Cuisle Centre and grounds in Donamon. Pic. Gerard O’Loughlin

Donamon Castle and its facilities, which include the former Irish Wheelchair Association (IWA) resort of Cuisle, would be ideal for alleviating the pressure on hospital beds that will arise during the Covid-19 outbreak, Independent TD Michael Fitzmaurice has suggested.

The IWA closed the respite resort at the end of November 2019 to a public outcry.

Deputy Fitzmaurice has called on the HSE and its senior officers to act swiftly and begin negotiations to take the facility over as part of a short-term lease.

“There are approximately 35 en-suite bedrooms located in Donamon Castle which would be ideally suited to cater for people who may have to undergo a sustained period of isolation under medical supervision,” he said.

“As a result of the Coronavirus outbreak, it is likely that hospitals will come under pressure in the coming weeks as we try to bring the virus under control.

“Obviously, it is critical for the general public to adhere to the protocols being advised by health care professionals to prevent the spread of the disease.

“But if Donamon Castle was utilised by the HSE, along with other suitable locations around the country, it would mean that there would be dedicated places for people who have been diagnosed with the virus to attend – rather than increasing the risk of it spreading to patients who hadn’t got it in regular hospitals.

“This is a common-sense approach which can be put in place now, and which would have significant benefits moving forward.

“We can be proactive now and reduce the potential for the virus to spread, or we can wait until the horse has already bolted before we take action and be reduced to chasing our tails.” He said he was willing and available to work closely with the HSE if he could be of assistance in securing the facilities in Donamon Castle for a period of six months or so, “while the country as a whole overcomes this outbreak”.

Meanwhile, a number of well known and much-anticipated events have been postponed or cut short due to the Covid-19 outbreak. The Roscommon Lamb Festival Committee has also taken the decision to postpone the festival due to the coronavirus outbreak.

“This is obviously disappointing for all who had planned to take part in or visit our festival. We will be looking at the possibility of rescheduling a shortened version later in the year all going well. Failing that, we will be planning as usual for 2021,” a spokesperson announced on social media on Sunday.