Planning for a post-virus future must start now

No one knows when life will return to normal this week as the world’s population struggles to get to grips with Covid-19. Normality will return some day, however, and sporting organisations, especially the GAA, must be ready when it does, suggests KEVIN EGAN…

As things stand, it’s fair to say that the current situation in Ireland is likely to go one of two ways.

The first possible outcome is that there will come a time at some unspecified point in the future where the collective effort of all the people on this island, led in the vanguard by some heroic work from frontline medical staff, will get us through this coronavirus crisis and something approximating normal life will resume.

The obvious exception here of course will be the fortunate few who have shares in hand sanitizer manufacturers, all of whom can start to plan their retirement in the Caribbean on the back of their companies’ recent boom.

Alternatively, the end of days is upon us, where the small handful of survivors will be forced to live off the land, forever to worry about the diminishing reserves of soap that are needed in order to practice proper handwashing techniques, and the possibility of marauding bats infecting them with new and improved strains of Covid-19.

If the latter scenario is how things play out, then the Roscommon Herald can offer very little by way of advice, apart from these few small nuggets. Citrus fruits will of course be hard found anywhere between Garranlahan and Tarmonbarry, so boiling nettles to make soup is a great source of vitamin C.

You can get protein from hunting weasels and otters, and their skin will also make for a warm pelt. Finally, newspaper makes for great insulation in draughty homes, so keep buying the Roscommon Herald for the next while in order to stock up.

Sadly, there ends my lesson in apocalypse survival.

Thankfully, it’s still more likely than not that humanity lives to fight another day, albeit with some people failing to make it through. Even if this happens, however, in the world of local sport, the scars of this experience will be visible for a long time.

There has been no end of speculation as to what will happen unfinished events, including the National Leagues in GAA, the Six Nations and the Heineken Cup, ranging right down to local schools’ championships and the Roscommon and District League soccer season.

This was coming to a crescendo at the weekend with a league decider between St. Peter’s and Castlerea Celtic, which could now take place at any time in the next couple of months, or even later. For bigger events like the Olympics and the European Championship finals, it’s entirely possible that a six or 12-month delay could be on the cards.

It’s far too early to predict when athletes might be in a position to dust off their boots and get back on the field, but perhaps the most optimistic scenario one might look at is that in GAA terms, the rest of the league will be wiped out with no promotion, no relegation and no Tier Two championship. Across the pond, the most likely outcome is that the Premier League will be awarded to Liverpool, much to the chagrin of Manchester United fans everywhere, but there will be no relegation and both Leeds United and West Brom will be promoted to make up a 22-game season next year.

The racing season will be greatly curtailed in any and all circumstances, though there will be room found for the Punchestown and Aintree Festivals, while in rugby, expect the outstanding Six Nations internationals to be played in the autumn, for the summer internationals to be cancelled, and for the Heineken Cup and league play-offs to be run off in a blitz-like fashion as soon as action resumes.

In time, the usual sporting calendar will fall back into place, but at a lower level, the sporting landscape will be transformed hugely.

Right now, the vast majority of club lotto and club fundraisers are suspended, while at a county and a national level, income is being foregone at a level that will have huge knock-on effects for the foreseeable future. In a world where smaller sporting bodies live from week to week or from month to month, a sharp shock like this is not easily brushed aside.

Perhaps even more significant will be the deep global recession and depression that’s likely to follow. Small businesses here in Ireland are largely to be commended for the way they are putting public health and safety first and closing their doors, but it’s a sad fact that not all will be in a position to reopen if the status quo continues for too much longer.

Of those that do, many will have to consider laying off staff. The self-employed community is set to go weeks and months with either greatly-reduced income or none at all, and even businesses that are robust and strong will need to find ways to cut corners as they try to get back on track in a world where everyone has to count the pennies all over again.

Government too will have to cut into their expenditure to bridge the gap, given the huge increase in demand for social payments that lies around the corner, not to mention the vast increases in health expenditure that are currently being incurred.

In a sporting world where clubs have gotten used to people in their community being in a position to chip in and support them in different ways, scaling back won’t be easy.

Here in Roscommon, some hard choices are likely to lie ahead. Sufficient sales have been registered so far for Win a House in London that the event won’t cost the county money, but a repeat of the seven-figure profit that was recorded last time out has just become far less likely, possibly even out of reach.

If the county board is still determined to press on with the dual ambition of putting in place a new training facility and upgrading the Hyde to host Connacht finals, they’ll have to lean a lot more heavily on cash-strapped people within the county, and on the clubs in the form of the sales targets for Club Rossie membership.

Whatever way things play out, in sport as in society, recessions always take the biggest toll on the poorest members.

Perhaps the only silver lining on the black financial clouds that are on the horizon is that there is time to prepare for this. Even the most optimistic estimates of what’s to come will project holes in budgets everywhere, and that can be overcome if there is a push all across the GAA to ensure that costs are brought down, that “cloth is cut” in every area of the association and not just in those areas that are disproportionately affected.

Simply put, there must be a real will to try and preserve the spirit and ethos of what the GAA is about. Already the disparity between the well-off and the not-so-well-off is incredible, but if those counties that are pushing themselves to full capacity and beyond to try and keep up are suddenly kneecapped even further, then the overall product will be damaged irreparably.

On the other hand, this could be the dramatic shock that forces the GAA to take stock of the situation and to realise that now is the time to put in practice the collective spirit that has been seen at a local level all across Roscommon and all across Ireland, where local clubs have stepped up to try and look after the members of their local communities that are most drastically affected and impeded by current events.

If these units, the bedrock of the association (or so we’re constantly told) can put society and community first, then they need the favour to be returned — and now is the time to start planning for that. 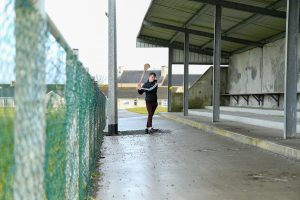