Waving goodbye to the handshake 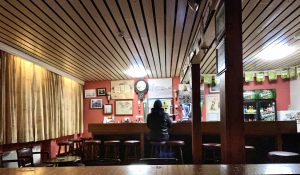 Brian Farrell pondering about packed pubs and handshakes in Dennis Dodd’s Crescent Bar, Boyle before pubs and bars closed to the public at the weekend.

It was one of the first things we were taught as a child. To stick out the arm and shake hands with grandad and neighbours and anyone our proud parents met on the street.

How many times have we, as adults, smiled with delight as we watched a young child, stand up straight, look us in the eye and reach out their soft hand.

Then, as we grew from child to teenager, we were warned that it wasn’t good enough just to put out the hand limply. We had to grasp the other person’s hand firmly and give it a good rattle.

Indeed there was a whole protocol, not always adhered to, surrounding the handshake.

The person of higher authority or age should be the first one to extend the hand.

You should never remain seated while shaking hands. You should look straight into the eyes of the other person and, most importantly, it should be a firm grip.

The grip said so much about the person. Anyone who had the pleasure of shaking hands with the late Dermot Earley certainly never forgot. It’s an honour I had myself and he near killed me.

But where did it all start? It’s illustrated on stone carvings as far back as the 9th Century BC and it’s believed to have been a sign of peace. Extending an open right hand showed that it bore no weapon and giving the other person’s arm a right rattle showed they had nothing hidden up their sleeve.

The problem is that the deadly weapon we now face is a virus, and the very act of touching is the danger. I was pondering in a pub the other evening if these new social practices were to linger on, even when the virus was gone, how would I ever explain the past to a new generation.

How to explain the joy and excitement of a crowded pub.

That feeling of opening the door to a packed bar and seeing the smiling faces of friends in the very far corner as they slapped backs and swopped stories. How to explain how you would automatically turn your body sideways and weave your way through the crowd, squeezing past strangers’ bellies, bums, and busts in an intimacy that was only entertained because of the understanding that you were in the pursuit of drink.

How could I ever explain to the future generation, the art of holding three pints above your head and a packet of crisps in your mouth, while easing your way through gaps which did not exist, uttering sounds from behind your clenched teeth which each and every person understood as “Excuse me? Pints on board. Heading for mates in the far corner. Thanks very much.” And no one took exception.

I remember returning to a bar after a long absence and the barman shaking my hand before lifting the empty pint glass to fill it with joy and anticipation. The head of the pint ran over his fingers as he laid it down before me to savour and swallow. I buried my face in it without hesitation.

Thankfully, there is a plan. A plan to see us through. A plan to keep us apart so that once again we can come together, to grip and grin, raise glasses and kiss complete strangers when Ireland goes over the line to flatten the old foe.