‘Sport isn’t the most important thing’

For any GAA player, the bump in the road often comes when it’s least expected — a bad injury, a red card or even a loss of form.

The looming shadow of Covid-19 has been around for weeks but when it smothered the sporting landscape a few weeks ago, the element of surprise emanated from how quickly and decisively it happened.

Roscommon forward Donie Smith was in his classroom at Adamstown Community College, located near Lucan Sarsfields GAA Club, when the news broke. In an instant, the crystal clear thought process in the lead-up to a promotion showdown against Armagh was replaced by confusion and uncertainty. While the confusion may have cleared up, the uncertainty remains.

“We’re GAA players. Sometimes that makes you selfish and all you think about is when you’ll be back out playing. But there’s a bigger picture here. People are dying from this virus, and that has to be the perspective,” stressed the Boyle player.

For Smith and his Roscommon team-mates, the season was coming together nicely. After an inconsistent start, victories against Clare, Kildare and Westmeath had put Anthony Cunningham’s side within touching distance of promotion. Now, Smith admits that it may have all been in vain.

“It had been a sluggish start. We put ourselves in great positions against Laois and Fermanagh. But we had no one to blame but ourselves for not seeing out those matches.

“I suppose the most satisfying thing since then is that we took leads against Kildare and Westmeath, and held on to them. That showed we had learned from our mistakes earlier in the league. We have been gradually getting better but we’re by no means the finished article.

“Suddenly, it all stops and your first reaction is to think about when it might all start up again. But sport isn’t the most important thing at the moment. Like everyone else in the country, you’ve a responsibility to do everything in your power to help stop the spread of this virus,” he explained.

The Roscommon players have been given individual plans to keep them ticking over but with the deadline at the end of the month for the resumption of GAA activity likely to be extended, Smith agrees that the Rossies’ defence of the Nestor Cup in Ruislip is unlikely to happen on the scheduled date of May 2nd.

“New York and Galway has been pulled, and you have to say, at this stage, it looks like our game with London is heading down the same track.

“It’s a strange feeling. It’s as if the season has finished, and it’s only March. When we go back, it will be like pre-season all over again. I think you can pretty much write off the league at this stage,” he observed.

Of course, that will be a source of major disappointment for a team on the cusp of returning to Division One but Smith feels that all the focus needs to switch to the championship and making sure that it is played later this summer.

“We had put ourselves in a great position, so it is disappointing from a Roscommon perspective. Then again, I’m sure there are a few teams that can’t wait to see the back of the league, given the prospect of playing in the new Tier 2 championship.

The spectre of knockout championship football looms large, something that will represent uncharted territory for Smith and his team-mates.

“It would be the first time since the qualifiers were introduced in 2001. No one on the current team has any experience of that.

“It will be difficult as every game will be like a final but it will give encouragement to those teams, like us, that feel they can beat anyone on their day. Maybe it will mean there’s less of a likelihood that bigger teams will be caught on the hop but, from our point of view, we’d fancy our chances against anyone,” he remarked.

Yet Smith accepts that the bigger picture must take precedence and that there will be time for games at some stage down the line.

“I suppose this Covid-19 situation is like something from a movie script. It’s important that we listen to what we’re being told by the experts. If we do that, the quicker everything might start up again.

“From a player’s perspective, you’re doing something every single day. We’re happy to do that, although you miss the camaraderie and the team environment.

“But we’re used of it anyway. You might train up to three times a week collectively, and for three out of the remaining four days you’re doing something on your own, so from that regard it’s not alien to us. Even if you weren’t playing football, you should always try and do a small but, just for your own headspace and mental health,” he highlighted.

As a teacher of science and biology in Adamstown, he feels that it’s a particular stressful time for Junior and Leaving Cert students, and that nothing beat the interaction between students and teachers in the classroom.

“Obviously we can keep in touch with our students online but the time spent with students in the classroom is the most valuable, so the sheer unpredictability in terms of where all this is going makes it particularly hard on exam students,” he continued.

When the green light is given for life to return to normal, Donie Smith will have plenty to keep him occupied. For now, he must continue to play the waiting game.

“You only miss something when it’s taken away from you. In small rural towns, there isn’t much else keeping communities going, apart from the GAA. We’ve just got to stick together and sing from the same hymn sheet on this one for the time being.

“Players won’t become too out of sync but we’ll need a bit of time together before we can go gung-ho for matches.

“I understand that it’s a tough time for everyone at the moment, but we will get through it,” he concluded. 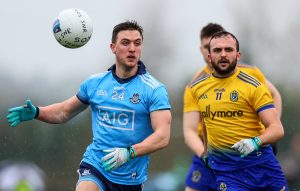 Everyone must play their part in a bid to stop the spread of Covid-19, according to Roscommon senior footballer Donie Smith. Picture: INPHO/Tommy Dickson