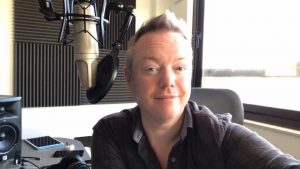 A Boyle native is behind a new pop-up radio station dedicated to informing and entertaining the public during the coronavirus pandemic.

A presenter on KissFM in the Algarve for the last two years, Frankie Shanley has returned to Ireland to devote his skills to an Irish-focused news channel entitled The Situation Room.

Frankie was spurred to action by the circulation of fake news on social media. “I want to keep everyone’s minds on real news and not fake news,” he said.

An administrator on the Coronavirus Ireland Facebook page, he decided to abandon the page after a series of false rumours were posted to it.

“There is just a lot of Mary from wherever sharing a comment she heard from someone’s sister’s husband. Then everyone jumps in, and you just think, ‘What is going on?’”

With two decades worth of experience on radio, Frankie said he knew how to verify facts and truth. “We always have to be very factual on KissFM. You have to look for the reputable sources,” he said.

His 24-hour digital news station will share information from official sources such as the HSE website and Garda. There will be no “rumours or gossip or copy and paste,” assured Frankie.

Known to his listeners as Frankie Beats, the Roscommon native has interviewed the likes of Drake, Cliff Richard, and Bonnie Tyler. A KissFM presenter of The Afternoon Show before moving to his new Breaking Music show, which won Number 1 Global Radio Show in 2018, Frankie will return to the Algarve in May after does his bit for Ireland.

While Frankie said he has “nothing but respect for RTÉ and Newstalk”, The Situation Room will focus on people and stories outside of Dublin and other metropoles.

“The idea is that anyone can switch in at any time and hear “Mary” in her house having the craic with me. Maybe some classical music as well,” he said.

The show, which is not designed to make money, will be free from advertisements.

The Situation Room can be listened to online or via the new mobile app.