Fusion Restaurant offers its food to the public 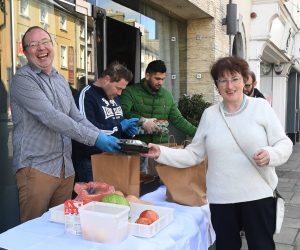 Fusion Restaurant in Roscommon Town donated its stock of vegetables and other perishable goods to the public last week after making the decision to close its doors during the Covid-19 pandemic.

Restaurant owner Niall Bracken said it took all of 90 minutes for some 80 kilograms of potatoes, boxes of eggs, cartons of milk, and fresh bread to be snapped up by appreciative passers-by. He had made a call on Facebook for charity and community groups helping the most vulnerable to take first pick on the items.

“We had ordered in loads of stock for St Patrick’s Day and it all would have gone to waste. It is much better that people make use of the food rather than it rotting in the bin,” he said.

Niall made the tough decision to shut his restaurant on Saturday, as no matter what procedures he put in place to encourage social distancing, customers still seemed to congregate at the counter or other areas of the restaurant.

“The staff were a bit worried so it just wasn’t worth it. This is an unprecedented situation,” he said. “We are all extremely worried. I have enough to pay my staff for the next week, but after that there is nothing coming in and nothing I can do about that.”

Niall said he was lucky his landlord was “extremely understanding” and had frozen his rent.

Meanwhile, he is appreciative of the Restaurant Association of Ireland’s lobbying efforts in trying to secure a package for business owners like him.

“Small businesses like ourselves want to know that when this is over we can hopefully employ our 14 employees again,” he added.

“When this is all over we will be ready to switch the lights on and open everything up.”