A journey that enriched so many lives along the way

Conor Connelly went for a jog near his home in Moorock, Ballycumber, on Saturday last.

For some reason, the Gods intervened and decided that, on the day of his son Rossa’s ninth birthday, he wouldn’t return.

To appreciate the former Roscommon player’s legacy, his journey, enriching the lives of the people he met along the way, reveals everything. From Creggs to Michael Glaveys, from Roscommon CBS to St. Mel’s to UCD, from St. Jude’s to Ballycumber, from Roscommon to Connacht, it’s fair to say that Conor Connelly gave it his best shot.

The reaction to his passing has been seismic. The GAA world is stunned, wondering why one of its finest ambassadors could be taken from this earth so soon at a time when he had so much more left to give, especially to his devastated family.

“The GAA owes me nothing. I love the game and always will. I played it as I first saw and experienced it in Creggs — with passion drive and courage. I hope to imbue my sons Rossa and Owen and daughter Caragh with some of those qualities and attributes,” he wrote for Creggs GAA some years ago.

In the same article, Connelly articulately charts his career. He recalls his third day in Roscommon CBS when teams for the First Year leagues were being picked. He was fifth last to be picked among a group of 60.

His reaction? “I’ll show them,” he vowed.

As a 15-year-old, he played senior championship football with United Stars — a Creggs/Oran combination that had the audacity to go to Johnstown and draw with a star-studded Clann na nGael team. Without a goalkeeper, an eager, enthusiastic Connelly volunteered and wasn’t found wanting.

In 1992, he was part of the Creggs/Fuerty team that won the U-16 B championship, a late smash and grab raid getting the better of Michael Glaveys in the final.

He was part of the Roscommon panel that won the Connacht Minor Football Championship in Castlebar that year, a side that would have to give second best to Armagh in the All-Ireland semi-final. He played alongside his brother Darragh on the same Roscommon minor team two years later, both of them scoring a goal against Leitrim in the provincial championship.

The next fork in the road took him to St. Mel’s, Longford, where he lined out at midfield on the team that won the 1994 Leinster Colleges’ Senior Football Championship, beating St. Peter’s, Wexford, by 3-11 to 1-5 in the final before being beaten by St. Jarlath’s, Tuam, in the All-Ireland semi-final. The late Shane McGettigan from Leitrim was also a member of that team.

When he left St. Mel’s, he made the UCD Sigerson Cup team as a First Year, playing on a side that included Trevor Giles, Brian Dooher, Derek Savage, David Nestor and Ciarán McManus.

While he spent five years with Michael Glaveys between 1995 and 1999, helping the club reach its first senior championship final in 1996, five seasons with St. Jude’s in Dublin and more recently with Ballycumber in Offaly, he always remained very close to Creggs

“In Creggs, you were expected to be able to win your own ball, and 100 per cent honesty and effort was demanded,” he said of his native club.

He talked about the influence of playing alongside Ger Dowd, Kieran Dowd, Frank Brandon and his brother Darragh, players that made him appreciate the ability of forwards to win their own ball, as long as you gave them the chance to do so.

He recalled Creggs teams with only ten players before matches, until a convoy of cars would arrive with the sight of “mud-caked players returning from a rugby match” alighting to make up a full 15.

“The rugby team were playing at a high intensity level at the time, and the physical and mental effort required to play two games the same day, sometimes on consecutive weekends, was extraordinary. It was sheer power of will, passion and love for Creggs GAA that inspired them to do it,” he reflected.

Mattie McDonagh, his Principal at Creggs National School and a holder of four All-Ireland medals, influenced him greatly, encouraging him to banish the inferiority complex that is often associated with smaller clubs.

Of course, he went on to enjoy a distinguished career with the Roscommon senior team. Given the rivalry with Galway coming from Creggs, nothing gave him greater pleasure that the Rossies overturning their maroon and white-clad neighbours. He relished every game in a Roscommon jersey, especially the numerous battles against the Tribesmen, even it was only a FBD League game in January.

His contribution to the Connacht championship winning team in 2001 was immense, playing pivotal roles in the victories against Galway and Mayo.

Conor Connelly was only 44 years of age. At a time when bad news infiltrates our world on a daily basis, it’s understandable that those who knew him best are struggling to come to terms with the reality of his sudden passing.

If there are any crumbs of comfort, the reaction and outpouring of emotion from an already paralysed GAA world may gave his wife Claire, their three children, family and friends some strength in the difficult days, weeks and months ahead.

*Thanks to Gerry Keegan and Creggs GAA Club for their help with this article. 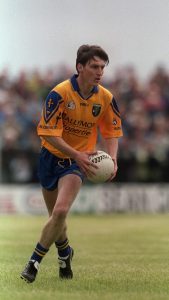