Okay folks, settle in and grab yourself a cup of tea, glass of wine, shot of tequila or whatever it is you use to relax, as this one might take a while.

A lifetime of watching sport for a living leaves you with some fantastic memories; but if you also tend to pick up match programmes and team sheets along the way and that collection of programmes quickly grows beyond the capacity of the various storage boxes designated for them, you end up with a very messy floor very quickly. The excuses not to deal with that situation tend to ring a little hollow right now, so this week the pile got tackled.

That of course led to lots of thinking about some of the different events that I’ve been lucky enough to attend, and some of the interesting stories that were picked up along the way. So here follows, in no particular order, some of the programmes and team sheets that evoke special memories – not because they necessarily correlate to the most high profile events or the most spectacular games that I’ve attended, but the games that stuck in the memory for a myriad of different reasons. 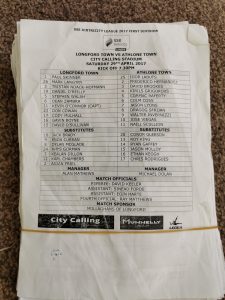 Once the brief and bright Roddy Collins era came and went, reporting on Athlone Town games was generally not a particularly exciting part of my routine, but this game proved momentous. Longford added a late goal to seal a 3-1 win, but that wasn’t the big story. Certainly there was nothing remarkable about Athlone Town losing a game.

Athlone players Igor Labuts and Dragos Sfrijan were accused of match-fixing based on very unusual betting patterns in Asia late in the fixture, and both players were subsequently banned for a year. The club and the players maintained their innocence, and while their defending for the third Longford goal – the one that was the subject of so many bets – was desperately poor, we’ll damn them with faint praise when we say such play wasn’t entirely out of character in these games around this time. 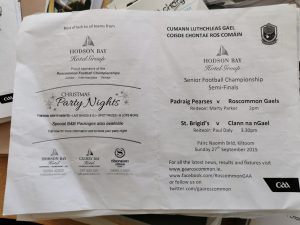 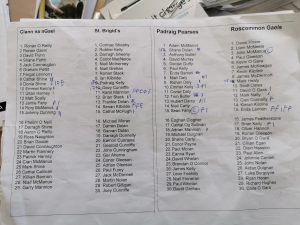 Pearses upsetting the odds against Roscommon Gaels in the first leg of the double header made for an explosive start to a huge day in that year’s championship, but the real drama was Clann’s dethroning of their neighbours and the five-in-a-row champions after that.

It was exactly the type of game that you’d imagine it was going to take to beat St. Brigid’s. Clann played superbly well in almost every facet of play, but St. Brigid’s hung in there, refusing to hit the canvas even though they took blow after blow. Clann produced some majestic scores while the home side lived off frees and scraps, and still it was in the balance until the end. When the final whistle sounded, the emotion around the ground made it patently clear that this was about so much more than just a place in that year’s county final.

Belgium vs Greece in the City Calling Stadium, Euro U-17 championships, May 6th 2019 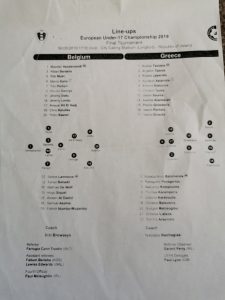 Some future stars of global soccer, as lined out in Longford.

The European U-17 championships bypassed the attention of most of the country, but some really fantastic games were played at venues all around Ireland, and this was certainly one of them. A hugely enjoyable afternoon, and while this reporter is far from an expert in matters of association football, it’s hard to imagine that the name Jeremy Doku won’t become a lot more widely known, based on some of his incredible touches and skills on show here. 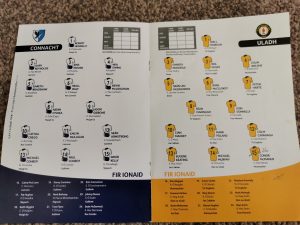 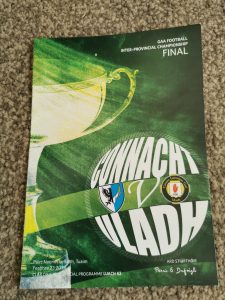 Some of the best footballers in Ireland, including Aidan O’Shea, Conor McManus, Keith Higgins, Michael Murphy and Colm Cavanagh togged out in a town synonymous with Gaelic football, and yet it stuck in the memory for one simple reason. There were more players, backroom staff, press members and county board/provincial officers in attendance than there were paying supporters. The Railway Cup may have held a place in the hearts of GAA people in the past, but this game made it painfully obvious that it’s a relic of a bygone era and is unlikely to ever return. 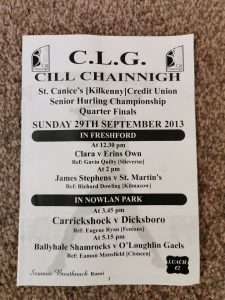 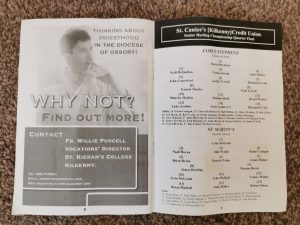 This match programme always sticks in my mind, not because of anything to do with the hurling, even though Clara and St. Martin’s put in very good displays to pick up wins.

Instead we have to ask – who would look at a match programme, see an advert for the priesthood, and either start to contemplate it as a vocation, or else see it as the final sign that this is the path for them? Admittedly it’s hard to find anyone studying the priesthood these days, but I’ll forever wonder if this approach ever bore fruit, either in the diocese of Ossory or anywhere. 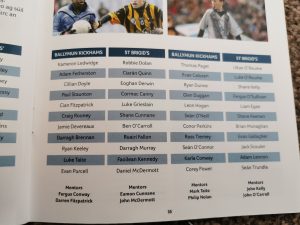 The players that lined out in the Go Games exhibition at half time in Croke Park. 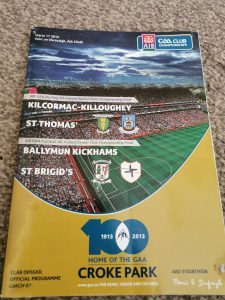 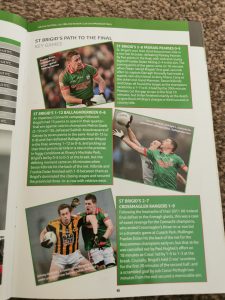 For all the reasons discussed in this piece here – this day will always stand out in the memory. Looking at the programme, it’s notable too that so many of the players who featured in the Go Games event in St. Brigid’s colours that afternoon have gone on to make a real impression at county underage level, or in some cases, in the worlds of rugby and soccer. 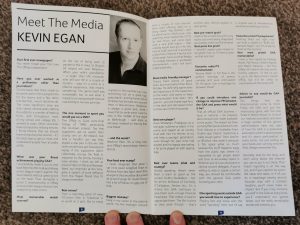 Buffy, Ballinlough, Ballyforan and boats to Inis Mór all get a mention. 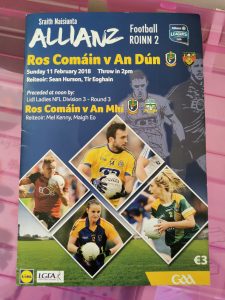 Not a good result from a Roscommon perspective, but my assimilation into the local community continued with another landmark event – my inclusion in the “Meet the Media” section of the programme. If there is anyone out there who took the decision to unearth the hidden treasure that is Buffy the Vampire Slayer on the back of my recommendation, please get in touch. For the rest of you, there’s no better time than the present. Read an online synopsis of season one, then pick it up from season two. Once you get to the final episodes of that series – Becoming, parts one and two – you’ll be back in touch to thank me. 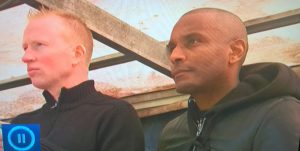 These two analysts have 36 caps for the Republic of Ireland between them. 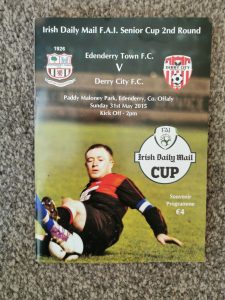 There’s always something special about a really big day; a once-in-a-lifetime event coming to a local club, and that was exactly what happened here. The result was as expected, with Derry City easily picking up a 3-0 win, but it was also enjoyable as I had a lengthy chat with the RTE analyst in the press box, who turned out to be a very friendly and amiable chap. Couldn’t quite place who he was, only to find out later that night while watching highlights on RTE that I had been conversing with former Republic of Ireland international striker Clinton Morrison. 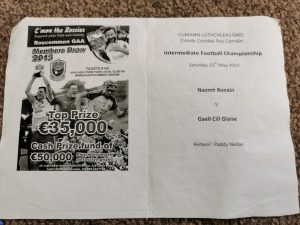 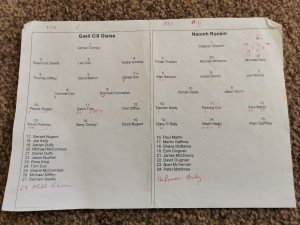 An odd one here some might say, but it made an impression for a couple of reasons. This was the first domestic club championship game I covered for the Roscommon Herald, having only signed on the dotted line to buy my home in Dysart earlier that month.

More significantly however, it was the first championship game in Kilglass when the new dressing rooms and pitch were opened. For very good reason, there was no shortage of pride and delight from the host club on the occasion, and they were delighted to showcase the incredible community effort that went into their facilities. After showing my press pass on the door I was ushered to the special press facility that had been created for the occasion; that facility being a table and chair at the side of the pitch. Since I was very unfamiliar with both teams however, I thanked the locals for their efforts and made my way over to the stand, where it would be easier check the players and subs with supporters of the two teams. It felt a little bit like telling your child that their drawing isn’t good enough to go on the fridge, but I will argue to my death bed that I just wanted to have the safety net of other locals around me, given that at the time, I’d have struggled to name a single player from either club.

Tommie Cox fired in a goal before half time to keep Kilglass in a game where St. Ronan’s were marginally the better side, and three late frees from Gavin Tully wrapped up a 1-9 to 0-9 win that felt like the right result for the occasion. 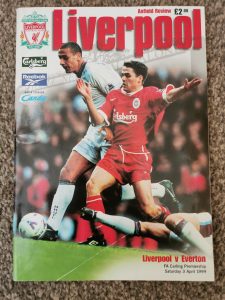 A break from the usual in here, but a special event for a few reasons. Firstly, my ticket on the boat and into the game was a 21st birthday present from some very good college friends that I shared a house with, and am very happy to call them close friends still.

It was also my first trip to a cross-channel game, as I grew up an Everton fan but by my late teens I lost the fervent passion for the sport that still lives on in people like Willie Hegarty and Ian Cooney of this parish. Still, it was a wonderful occasion and became all the more so as it turned out to be a rather controversial one as well. This was the game where Robbie Fowler scored in a 3-2 win for Liverpool, and celebrated by “snorting” the end line. It’s always nice to be there for a piece of history!

Tipperary vs Roscommon in Ferbane, All-Ireland LGFA U-16 “B” Final, Saturday August 8th 2009 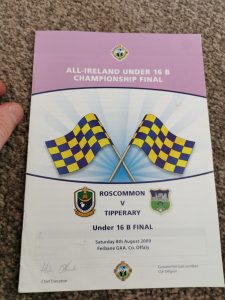 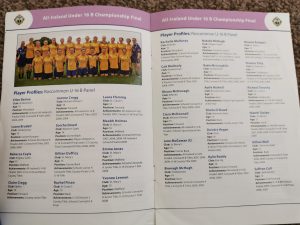 A strong Roscommon team that featured future senior stars like Joanne Cregg, Natalie McHugh, Gillian Dufficy and also had Laura Fleming and Richeal Timothy on the bench came into the game as hot favourites but fell short by 1-11 to 0-8.

Perhaps the most memorable aspect however – aside from the fact that it was the one and only time I had a match report published in the Roscommon Champion newspaper – is the remarkable corner back play from Jane McGowan and Sorcha Dowd. Both put in performances of incredible focus and concentration, taking on future Tipperary seniors in Aisling O’Connor and Sarah Fryday. In fact one of the two Roscommon players even spent most of the game with her back to the ball, looking into her opponent eye to eye, something I’ve never seen deployed to the same extent since. My notes tell me which player it was but my memory tells me something else, so I won’t go any further than to say it was one of the two! 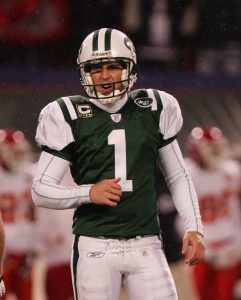 He’s no match programme, but Mike Nugent did kick the winning field goal for the Jets in their 13-10 victory over the Chiefs.

Okay, I’m cheating here a little since I don’t actually have the programme to hand, but while I’ve been at a handful of NFL games, none will stick in the mind like this one. This was cold. Not FBD league cold, or Connacht schools’ game in Bekan in January cold, but proper New York cold. The air temperature was around minus eight with additional wind chill, and naively, we (this was part of a trip to New York with my now wife) thought the standard get up of a heavy coat, hat, scarf and gloves would do the trick.

When we saw local supporters going in with duvets, we realised we were mistaken. The Jets won 13-10, and of course it went to overtime. I love this sport and usually a three-hour game flies by. Not this time.

GAA enacts new “anti-eejit” rules ahead of return to action