Kevin Egan of the Roscommon Herald spoke to several GAA personalities this morning to get their thoughts on what Easter Egg was there for them when they woke up.

Anthony Cunningham, who got a Crème Egg Easter egg.

“Look, there’s a lot we need to work on here. We’re not going to underestimate any egg and the shell on those Crème Eggs can be quite tough to break down, they’re very solid defensively. There’s two of them in there and of course the plain chocolate one as well, but we’re just going to take it one egg at a time, focus on the task at hand, make sure we get the process right and hopefully then we’ll be in a position to make a breakthrough and get into the fondant later”.

“It’s a disgrace, and it speaks volumes for the way society has gone. This is what happens when people lose touch with the grassroots, they’re up there in their ivory towers and they think this is what people want?”

“Do you think a farmer living on the side of a mountain in Mayo would be well-served by something like this? It should be free Dairy Milks for everyone, and not just because it sounds like the best county in Ireland. You give people something like this and you’re forcing them into bars because they’ve no option. That bar might be a KitKat or a Twix, but it’s still not the way we should be steering the young people!”.

“The Easter Bunny might still be a folk hero in this country and he’ll no doubt be very popular this morning, but you can forget about him as a man”. 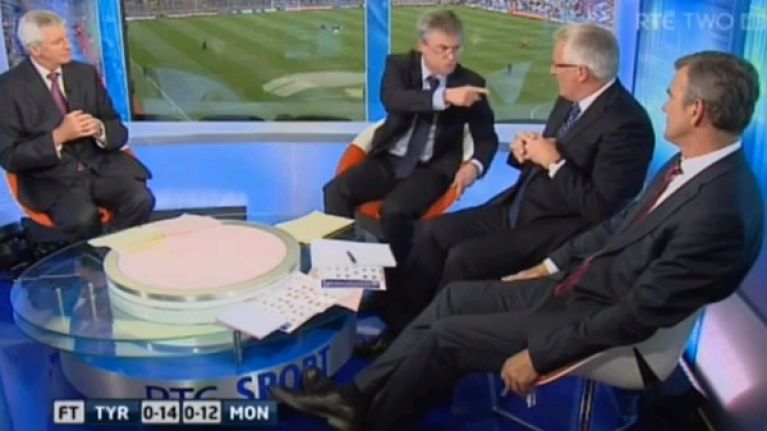 Joe Brolly making it clear how he’s appalled by everything the Lindt Bunny represents.

“There’s only one way to describe that, and that’s puke chocolate. In football these days, lads are all about the handpass and they’re not able to kick a ball 30 yards over the bar. This stuff is the same – nothing only butter, and they’ve forgotten about the cocoa beans. There are people who go to the Hague for war crimes, well these lads should be in the dock for crimes against chocolate.

John Mullane, bursting into tears of joy after receiving his egg.

“I loves me Bounty!”

“It’s completely unfair to say that we’ve any natural advantages, just because here in Dublin we’ve got most of the population and most of the wealth. We work hard for all the eggs that we receive, and if other people don’t have lots of rich uncles working in global insurance who can buy them whatever they want, then they just need to get their own house in order”.

Willie Hegarty of Shannonside radio and the Roscommon Herald, trying to explain which egg he received this morning.

“I was like a sheep that saw a gap in the hedge this morning when I saw it on the kitchen table, I was darting in straight away! It was meant to be full duck this afternoon but it might be no dinner now, we’re stuffed to the gills here in the Hegarty household! Never mind the Coronavirus, I feel like I have the cocoa virus”

PS – He spent three minutes answering the question and we still don’t know what egg he got. Given his profession, our guess is that he went live on Aero.