Club GAA and soccer could take place here in Roscommon as early as late July, following the road map that was laid out by an Taoiseach Leo Varadkar yesterday.

According to the phased plan for the re-introduction of sporting and social activity, the government will “permit people to engage in outdoor sporting and fitness activities, involving small group team sports training (but not matches) where social distancing can be maintained and where there is no contact” from June 8th.

On June 29th, they will “permit behind closed doors sporting activities events where arrangements are in place to enable participants to maintain social distancing”, while on 20th July the door should be open for “sports team leagues (e.g. soccer and GAA) but only where limitations are placed on the numbers of spectators and where social distancing can be maintained”.

Meanwhile rugby and boxing have been deemed to be “close physical contact sports” where an August 10th resumption has been mapped out.

Here in Roscommon, the landscape is very different for the local sporting bodies.

The Roscommon District Football League is still hoping to complete their season, subject to approval from footballing authorities. League chairman Niall Kelly told the Roscommon Herald that “We are going to continue to follow the guidance and protocol set out by the FAI. Our aspirations would be to finish the leagues as soon as possible and to have a break before we start a new season.

Most of the RDFL league competitions were very near conclusion, with St. Peter’s and Castlerea Celtic due to play a deciding fixture in the final round of games in the Premier Division. However most cup competitions have a lot of time to run, and here the Connacht FA will also be a factor as they oversee the Connacht Junior Cup and Shield. 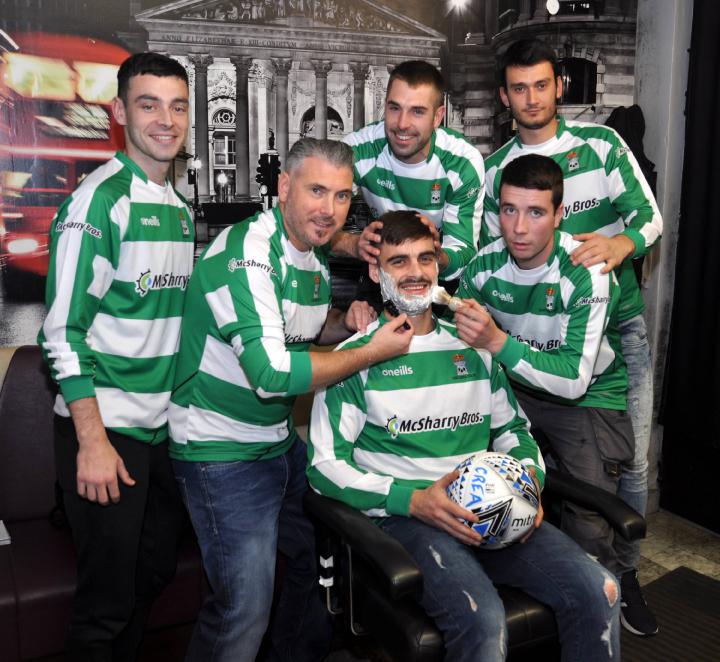 Castlerea Celtic players, pictured here during their participation in the “Movember” challenge last winter, may yet get to play their league decider against St. Peter’s

On the GAA front, local fixtures will be determined by the overall national plan set by Croke Park. The Roscommon senior, intermediate and junior football championships were not due to get underway until mid-August anyway, however some re-organisation would be required to accommodate the senior hurling championship, with several dual players involved in clubs like Oran, St. Dominic’s, Athleague/Tremane/Fuerty and Four Roads/St. Aidan’s.

Whether this can proceed from August will depend on how social distancing rules can be implemented at games, and if there is a desire and a pathway to playing intercounty competitions first. Given the severe restrictions on large crowds, it may be seen as more desirable to simply hand over the remainder of the season to the club game, given that large attendances are unlikely to be a factor until the knockout stages of local championships. No statement has been issued by Croke Park or Roscommon GAA since yesterday’s announcement.