Five years on from Marriage Equality vote is Roscommon a different place? 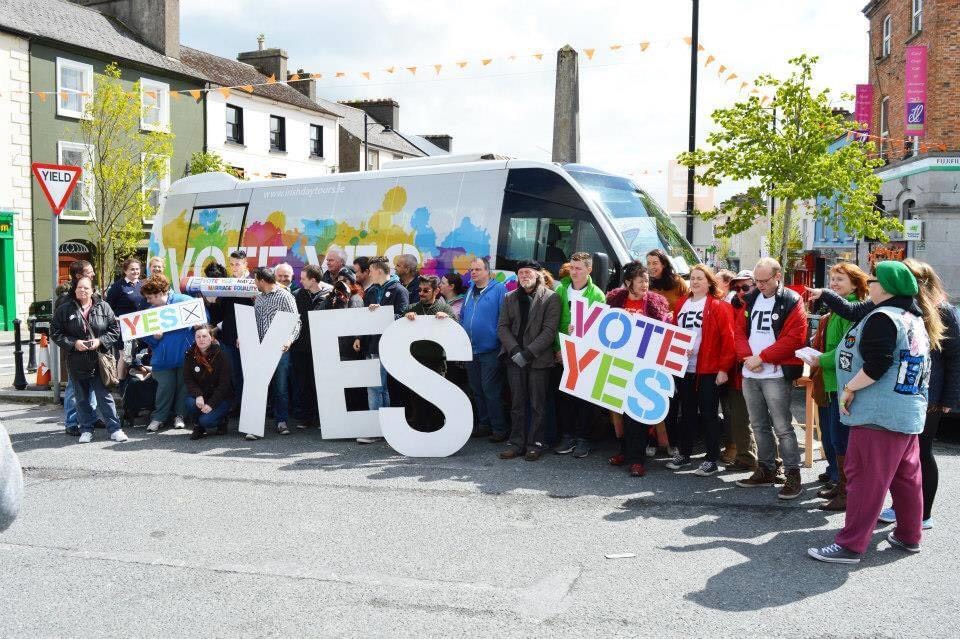 The Yes campaign on the streets of Roscommon.

It is five years since the Irish public voted overwhelmingly in favour of marriage equality, making Ireland the first country in history to approve same-sex marriage by popular vote. Few in this area could forget that Roscommon-South Leitrim was the only way place to reject the proposals, with the No vote finishing at 51.4 per cent. While Donegal South-West constituency voted Yes by a margin of just 33 votes, Roscommon South-Leitrim was dubbed the conservative outlier. Five years later has Co Roscommon’s attitudes to same-sex marriage changed?

Patrick Kelleher (26) from Castlerea believes the result, if the referendum was held today, “could very well be different”.
“I would like to think that it would be different. I don’t think that people in Roscommon are anti gay or anti LGBT+ in any way and I don’t think they were at the time,” he said.
Reflecting on the campaign, he believes there were “a lot of issues at play” in County Roscommon and elsewhere.
“A lot of it was that the debate was so messy and a lot of people got very lost and confused and didn’t know what they were being asked to vote on,” he says.

Living in Mountbellew in East Galway during the 2015 marriage referendum, Ballaghaderreen-native Stephanie Brown (30) followed proceedings in Roscommon very closely.
“I don’t think it was necessarily an anti-LGBT vote, I think it was just more traditional,” she says, adding that more LGBT+ people have chosen to live in rural Ireland now.
Despite the No vote in Roscommon-South Leitrim, Stephanie Brown moved back to her home county shortly after the marriage referendum, as she always found the people “very welcoming”.
“I have never experienced any sort of derogatory behaviour from anybody in Roscommon. For me actions speak louder than words. I know there was a No vote, but we have found the people of Roscommon far more welcoming than people elsewhere,” she says.

Perhaps the most visible Yes campaigner in County Roscommon was Knockcroghery farmer Will Keane. The day of the results was “bittersweet”, he recalls, adding: “I was overjoyed with the national result, but you still have to deal with your own backyard. I can’t say there wasn’t a tinge of sadness.”
“I think there was a reluctance to change and I think there was maybe not so much discourse on the topic in Roscommon,” he adds.
Life in County Roscommon is “really positive”, Will says, adding: “As well as this being passed nationally, above all there is a higher acceptance of LGBT in society.”
“It is incredibly gratifying to feel like you are on a par. It is when you don’t have the same rights as everybody else you notice it and it galls you,” he says.
Will suspects a rerun of the referendum even the day after could have returned a Yes vote: “Aside from the fact we were the only county to vote No, the people of Roscommon, knowing what they knew and seeing those happy scenes from Dublin Castle, might have changed their minds.”

Five years on, Anne Rigney, a well-known visual artist, resident in Knockcroghery who got involved in the campaign for her son, recalls that they did get some negativity on the ground campaigning. “I also think our local politicians failed to get involved in the campaign, except for then Senators Maura Hopkins and Frank Feighan. If our politicians had engaged, I believe the referendum would have been passed in Roscommon,” says Anne.

Were the referendum to be held now, would the outcome be different? “Yes definitely,” says Anne, adding: “looking at the result for the Eighth Amendment referendum. Things are changing, though there are still signs of homophobia in society. It does take time for things to change.

During the campaign, Anne penned her own poem ‘Imagine It’s Your Child’ which received favourable acclaim and which she performed in the National Library. (see clip below)