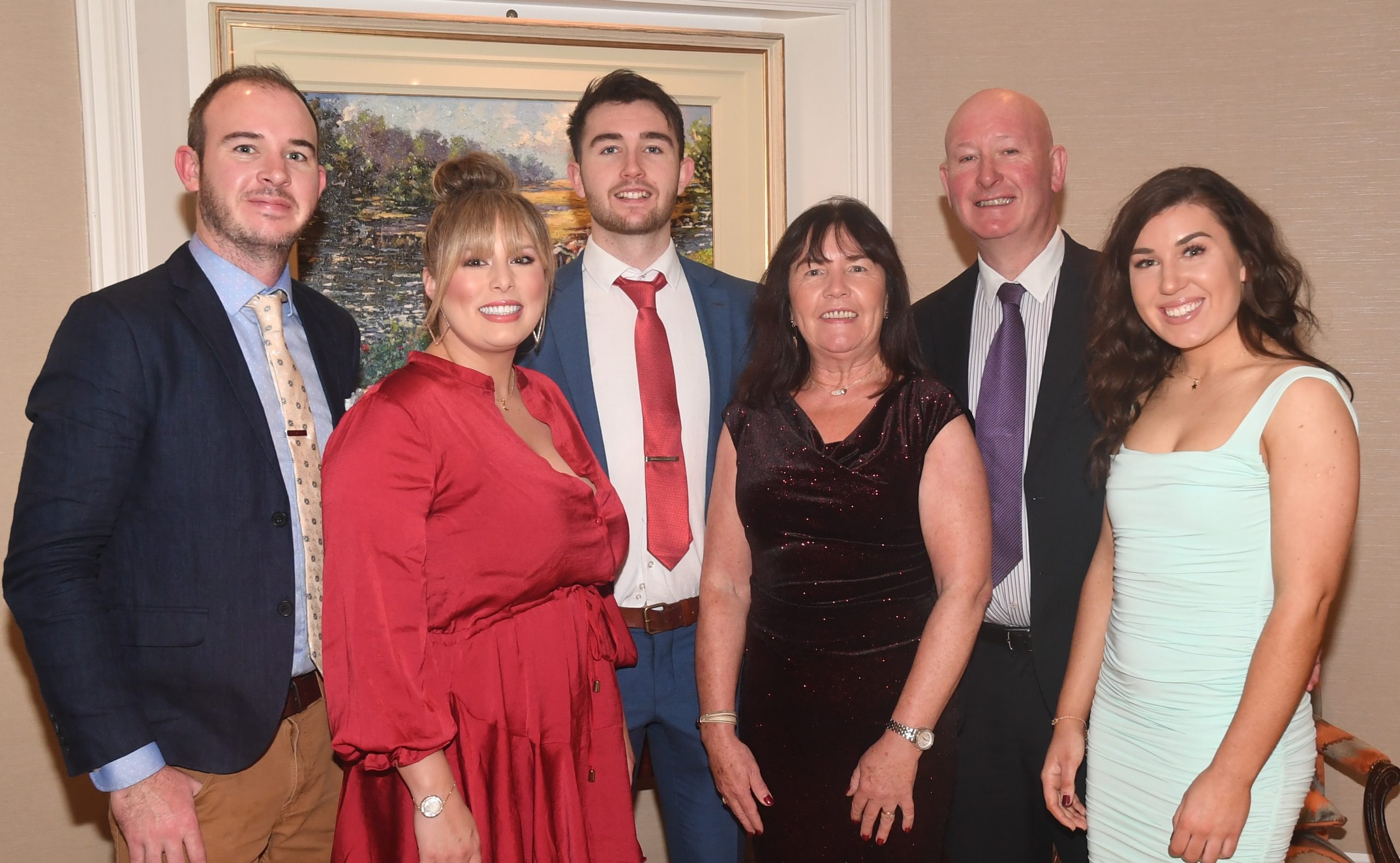 The Cregg family are synonymous with Gaelic games in County Roscommon.

Brendan Cregg grew up supporting the “Green and Red” of Mayo but, now living on the Roscommon side of the county boundary, the pull of the “Primrose and Blue” jersey has moulded him into a “transformed Rossie”…

Like many GAA followers who have settled across the county boundary, there’s a bit of tug of war with the heart strings when it comes to Connacht championship time.

Throw in a grandfather who originally hailed from “God’s county”, as he called it, a school where I worked that was divided three ways and a couple of children who play for the Rossies, then, maybe, my difficulty is understandable.

My grandfather emigrated from Ballinlough to the United States in 1909. He fought for the US army in World War I, before marrying my grandmother who hailed from Kilkelly in County Mayo. When her only brother died of the Spanish Flu, they returned to Mayo to run the farm. They later opened a shop and that’s where I grew up.

I played football for Aghamore and later for Kilmovee, when that club split up. I taught in the primary school in Charlestown for six years, and it was here that I got my first taste of coaching with the school team and the club’s underage teams.

I served as secretary of Kilmovee Shamrocks for six years and was an officer of the East Mayo Board and a Mayo minor selector during this time.

In 1983, I was appointed principal of Cloonfad NS, which is just inside the Roscommon border in the parish of Kiltullagh. This is the same parish my grandfather emigrated from, so I had returned to my roots.

Cloonfad does not have a huge GAA tradition, located at the opposite end of the parish from Peadar Earley Memorial Park in Ballinlough. But you would not think it when the provincial championship rolls around.

It is here that the three counties meet — Roscommon, Mayo and Galway. Roscommon pupils comprised about two-thirds of the numbers in the school, Mayo about a quarter, with the remainder hailing from the village of Cloonkeen on the Dunmore Road, County Galway.

Lunch-time matches involving “Roscommon against the rest” were played with gusto and often ended with a breakdown of diplomatic relations. Tensions in the classroom often took a while to diffuse afterwards, especially as the principal often doubled up as both the referee and goalkeeper “for the rest”.

The banter in the pubs, shops and at club matches tends to ratchet up a few notches at championship time. It is normally friendly, rarely resorting to vandalism — except on the odd occasion that is.

One such incident involved a Mayo “banger”.

As a diehard Mayo supporter in those days, I travelled to all their matches and made no secret of my allegiance. Like many others, I returned from Croke Park disappointed and disillusioned on numerous occasions.

Many believe in the curse of ’51, but in James Laffey’s book “The Road To 51”, it is plain that hard-luck stories began long before that.  James recounts those tales in the Connacht final of 1925. Mayo were denied a Connacht, and possibly an All-Ireland, title when a Galway supporter kicked a point, which was allowed, during one of several pitch invasions.  Galway won on a scoreline of 1-5 to 1-3 and went on to be crowned All-Ireland champions. Mayo were left cursing their luck.

They had every reason to feel hard done by as the actual Connacht final was played after the All-Ireland final in which Mayo had beaten Wexford. In the midst of all this confusion, the central council awarded the All-Ireland to Galway after the Mayo delegates had reputedly left the meeting early!

Many years later, the school principal parked his old “banger”, once green, now sporting a red stripe also, in the village car park with the sign “Gone to collect Sam” on the window. It has to be said that this was both a brave and confrontational gesture.

When he returned, minus Sam, the car had disappeared. He later discovered it hanging over the edge of the local river, where it had been pushed through the school grounds by some “Rossie hooligans”.

Later retrieved, thanks to the school caretaker’s tractor, a local wit outside the pub shouted, as the unhappy wagon passed,: ‘you didn’t get Sam but your car nearly sank”.

To this day the culprits have evaded detection, but the list is now narrowed down to about 40 suspects!

I joined Michael Glaveys GAA Club where I served as chairman for a number of years alongside coaching many teams. I played for Glaveys and discovered that although intercounty banter was to be enjoyed, there were limits to its acceptance.

Hanging a Mayo flag over the dressing room door on the eve of a Roscommon/Mayo clash was probably pushing it a bit too far. As we jogged around the pitch at the end of a training session, the threats became more ominous and sinister as the laps increased. By the time the session was over, the humour of the situation had passed.

When dealing with such battle-hardened warriors as Gerry Fitzmaurice, Pat Morris and company, caution was often the better part of valour. The flag was promptly removed after training, before any life-threatening damage ensued.

Many county titles later as coach with Glaveys, I joined the county minor board — first as PRO, seven years as vice-chairman with responsibilities for fixtures and a further seven years as chairman.

As chairman, I worked with great county minor managers, men like Eamon and Tony McManus, Fergal O’Donnell, Gary Wynne and Ross Shannon. They are true Roscommon men with a huge passion for their county and I was awestruck by their dedication towards its betterment on the football field.

I will never forget sitting in the dressing room in Castlebar after losing to Mayo in the first round of the 2005 Connacht Minor Championship. There was no back door in those days. A team, which had been much heralded and was the first to come through our development panel programme, were knocked out in the first round. I witnessed grown men with tears in their eyes and I was struck by how much it meant to them.

But sport has a strange way of turning everything upside down and the following year, a team, with little or no expectations, were crowned Connacht and All-Ireland champions.

Walking across MacHale Park with a Roscommon team was a strange experience for me. My predicament wasn’t helped on one occasion when a former playing colleague from Kilmovee enquired from the stand as to why I was wearing a Roscommon top.  The words “traitor” and “turncoat”, echoing from the stand, did not sit easily with me and certainly not with my colleagues on the management team.

I had questioned this particular manager’s commitment to his county when he dallied over accepting the position, but now after discovering I was under attack from the enemy, he was horrified. The discovery of a mole in MI5 would not have been so shocking, and it took some time to clear my name of suspected intercounty espionage.

I will never forget 2006. Defeating Galway in the first round of the provincial championship at Dr. Hyde Park, following years of defeats (many of them dispiriting), represented a wonderful, if slightly fortunate victory.

For me, it was a profound occasion. My father, God rest him, passed away the night before. As chairman, I spoke to the players and management in the dressing room before the game and wished them well, as my dad would have wanted.  He was a proud Mayo man but had a soft spot for his own father’s county.

After the game a number of Roscommon supporters commiserated and congratulated me in the same breath. At a time of sadness, I was uplifted by the occasion and I knew that I was a Roscommon supporter to the core now.  That wonderful bunch of players and management led us to the “promised land” in 2006 — the beginning of a great odyssey for Roscommon football, which has lasted to this day.

When my daughter Joanne began playing county underage football, I got involved in coaching and managing county ladies’ teams. In recent years I have served as chairperson of Roscommon LGFA, a position that I thoroughly enjoy.

Strangely, it is a preoccupation with beating Mayo that often drives me now. Our ladies at underage level have matched Mayo in recent years and have beaten them consistently at minor level, although the breakthrough at adult level continues to evade us. But we are working towards it and huge work is being done at development level.

What strikes me about all Roscommon teams, male or female, is that they tend to rise to the occasion, particularly at the sight of a green and red jersey. For a small county, we often punch above our weight. We contest ferociously at club level, but we come together unified when we don the “Primrose and Blue”.

For me, it is the camaraderie that I enjoy most. The sense of belonging to something special.

Our house is a fanatical Roscommon one now. When the older children facetime from abroad, the conversation mostly revolves around the fate of Glaveys and the Rossies.

The two youngest basically live in Roscommon gear while my wife Geraldine and I, though still wanting the best for our native county, are transformed Rossies.

Sometimes when I look out from my back door at the next field to the west, which is in Mayo, I think how different it would be if I had built a house there.

There is still a tingle of nerves when I see the Mayo team emerge from the tunnel, or when I hear the Saw Doctors sing the “Green and Red of Mayo”. But the stronger pull is towards the people I know now, the lads and lassies that I have coached and worked with, the fine people who support the Primrose and Blue.

As summer comes around and the days are lengthening, the sap of Connacht championship fervour begins to rise. However, I realise that this year will be different. Covid-19 has thrown our plans into chaos. But we live for the day when life returns to normal.

Grown men and women, who may only have a passing interest in the game, lose all sense of reason when the honour of their county is called into question. County colours bedeck every house, lane and street, and mini-Connacht finals are played in back yards and gardens.

Along the borderline, the intensity can reach fever pitch. There is no sitting on the fence here. You have to declare your allegiance and defend it.

I jumped off the fence a while ago, but I still enjoy nothing more than the banter and craic of Connacht championship time.

Long may it continue.