Roscommon’s GAA referees are “looking forward to getting out on the field, just the same as the players” according to the county’s refereeing co-ordinator Haulie Beirne, who added that he expects an incredibly busy few months ahead for the men in black.

“Nothing has been confirmed yet but we’re expecting underage games to be played midweek with the adult games at the weekends, so it’s entirely possible that referees could be asked to cover games every day from Tuesday through to Sunday” he told the Roscommon Herald. 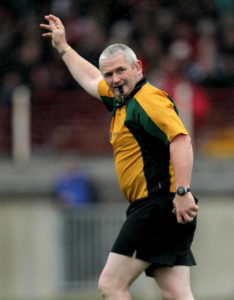 In recent years, Beirne and other members of the refereeing community in Roscommon have engaged in a recruitment drive to try and address the lack of referees in the county, as well as the older age profile of many of those involved. Due to age and other factors, he confirmed that three referees have asked not to be given games until the Covid-19 crisis has fully abated, but he said that bringing a strong new cohort of referees on board at the start of the year will make things much more manageable.

“We have a couple of referees with underlying issues who have asked not to be considered for games, they’re just a little fearful of what might happen until there’s more certainty that the virus has been fully cleared” he said.

“Obviously the important thing is that everyone in our little community stays safe and well, and we don’t want to put pressure on anyone, people always have their own unique family circumstances. Still, I’ve only heard from three referees so far, I don’t expect there’ll be many more, if any, asking not to get games.

“Paddy Neilan is also not available to us, he was injured earlier in the year and he’s looking at getting back on the field in October or November, so that’s another one off the list. 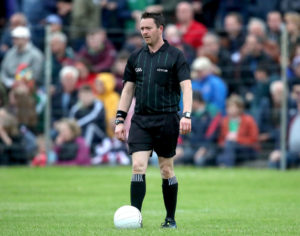 Leading Roscommon referee Paddy Neilan is unlikely to be able to cover any Roscommon club championship games this season due to injury. Picture: INPHO/Bryan Keane

“On the other hand we had 12 new recruits come in at the start of the year and of course it’s a pity that we haven’t been able to give them games, but even to have them available to do the line for some of the championship games will be a big addition. Between Senior, Intermediate and Junior A football, that’s 18 games of a championship weekend, or 54 officiating roles to be filled. That’s not easy to do. There are some very good people in that new group though, and they’ll be incredibly valuable to us when we sit down to try and work through all the fixtures.

“We’ve also had some good new referees come in over the last couple of years and some of them have also shown that they’re ready to step up to the next level, so I expect we’ll be able to use them for some games and that’ll also help us to make sure everything is covered” he concluded.

Round One complete, it’s time for the first Roscommon Herald SFC Team of the Week!