Stage set for a “Leicester City” in the Roscommon SFC?

The announcement by an Taoiseach Leo Varadkar last night that all sporting activity can now resume on Monday June 29th is now being absorbed all across Roscommon, in particular on the local GAA club scene where teams can feel the clock ticking down towards the start of the championship on Friday, July 31st.

Previously the guidelines suggested that full contact would only be allowed from July 20th, but this weekend officials are meeting in Croke Park to discuss last night’s announcement, and there is a possibility that the timetable may be moved up.

“We’ll follow the government and the GAA’s lead” is the verdict of St. Croan’s manager Eamon Towey, who said that his players have been meeting up in small groups.

“It’ll be great to have pitches re-opened and insurance cover in place, we’ve been doing a bit on soft, boggy ground to try and make sure players don’t get injured, and obviously there’s no contact so there’s no chance of collision injuries, but you’d still much prefer to be on your home facilities and with insurance in place” he told the Roscommon Herald.

Basil Mannion is preparing for his third championship campaign at the helm of the Boyle club, but he says his contact with his players has been very minimal since the Covid-19 crisis broke out.

“We keep in touch over Whatsapp and have had a few Zoom meetings, but the way we did it was leave the county lads to work away themselves, they had enough on their plate. Then we broke the lads up into small groups and put a senior player, guys like Seán Purcell and Roch Hanmore for example, in charge of each group to make sure those players were keeping themselves ticking over. When it became clear there was no quick return on the horizon we took the month of May off, and now we’re watching closely to see when we can back out in groups in Boyle. 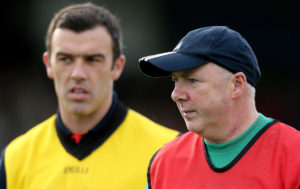 Basil Mannion and Benny O’Brien, pictured here on the sideline for St. Brigid’s in the 2013 county final, agree that this year’s senior championship is open for some surprise results. Picture: INPHO/James Crombie

“Lads might tell you that they’re keeping fit, and no doubt they feel that they are, but it’s only when you get out in a group that you can see where they are and how much work needs to be done.

On paper, Boyle look like one of the clubs that could be better poised to hit the ground running, as they made real progress in 2019 and were very competitive with county champions Pearses in their group game and in the county semi-final.

“It’s the same for every team, but we would have liked a league campaign all the same. Players like Daire Cregg, who’s coming back from injury, and Cathal Feely just out of minor, these are lads that would have benefited from a league campaign. We know we’ve still some improvement to find and that can come from your existing players too, but overall I’d say this will be a very ‘on the day’ championship”.

In contrast, St. Brigid’s manager Benny O’Brien is in a much tougher spot as he looks to implement a changing of the guard in Kiltoom, with much of last year’s successful U-20 side now part of the senior panel.

“More than most clubs, I feel we needed the O’Rourke Cup” said O’Brien.

“There’s only a handful of players still there from when I was last in charge just a few years ago, and while these are good young footballers that have a bright future ahead of them, it takes time to get used to the pace of senior club football. The league is a crucial stepping stone in that regard and I personally would have liked to see Roscommon play a couple of rounds of the league before getting straight into the championship” was his verdict.

While Pearses remain the clear favourites to retain their title, O’Brien echoed the view of Basil Mannion, saying that it was very difficult for management teams to put systems of play in place at such short notice and without that time to learn and develop as a group, the door was open for some teams to spring a surprise.

Eamon Towey was in agreement. “You’d have to think that this could be a year for a Leicester City-type run from someone. You mightn’t have an underdog going all the way and winning a championship, but when it’s all happening so quickly, a team that can get on a run, like Fuerty did last year, could very easily find themselves in a county semi-final with a great opportunity very quickly”.