The revised fixtures plan that will see Roscommon’s club season get underway on Saturday July 18th was approved at last night’s virtual county board meeting, despite opposition from a number of clubs who had concerns about pressures on dual players.

This was the first time that the Roscommon County Board met through an online platform, as it was the first formal county board meeting since the Covid-19 crisis broke.

County Board Fixtures Secretary Gerry Keegan presented the plan which will see the action culminate at intermediate level on Saturday, September 19th, a senior county football final the following day, the Mickey Cunniffe Cup will be awarded on Sunday, September 27th, and the junior football championship resolved on Sunday, October 11th.

With just nine weeks between the first round of adult football and the county senior and intermediate finals, heavy congestion was inevitable and many clubs expressed particular concerns with the impact on dual players, particularly the possibility of some players having to play three games in a week in mid-August. Bernard Haughey (Tremane) and Gerry Wynne (Fuerty) both spoke about this situation and felt it was unfair, while Gerry Keegan responded by highlighting how that would only be an issue if a club with adult hurlers ended up in a senior or intermediate football playoff.

“The issue wouldn’t arise if it happened to be a game between St. Barry’s and Ballinameen, but the alternative would be to have players possibly playing two championship games on the same weekend,” he explained.

Gary Jordan (Western Gaels) and Pat Compton (Strokestown) were among the delegates who gave their approval to the proposals and praised the work of those involved, given the unique circumstances.

The issue of a county final replay was also raised by some delegates, though it was agreed that this would be looked at closer to the time.

Gerry Wynne (Fuerty) proposed to revert to the previous fixtures plan, which did not have the playoff possibility, and this proposal was supported by several clubs, including Athleague, Fuerty, St. Brigid’s, Clann na nGael and Roscommon Gaels, but ultimately was defeated. 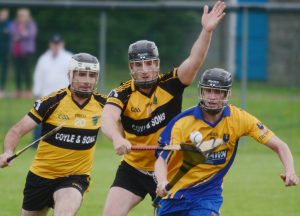 The underage fixtures schedule had been the subject of revision in the past couple of days, having originally been laid out to get underway on Tuesday, August 4th. This plan put a huge amount of pressure on some clubs, with dual players again heavily affected, being asked to play three and four days in a row in some instances. There were also instances of clubs having U-16 and minor fixtures the same day.

However, Coiste Iomána agreed to move a number of their games back into the extra two-week window from July 17th to the 31st and with other football fixtures moved, the new plan met with widespread support at the meeting.

Saturday, September 26th is the date fixed for the county minor finals, with October 4th, (minor hurling), October 10th (U-16 football), and October 18th (U-14 football) also pencilled in as key dates. The remaining piece of the puzzle is the U-12 football schedule, which is yet to be released. Traditionally these games are played on Saturday and Sunday mornings, but Jim McGrath (Coiste na nÓg) said that he was conscious of the pressure on referees with so many adult games fixed for those days, and he said that they would give more consideration to that issue before releasing their plans.

Filed under: Fixtures, Roscommon County Board