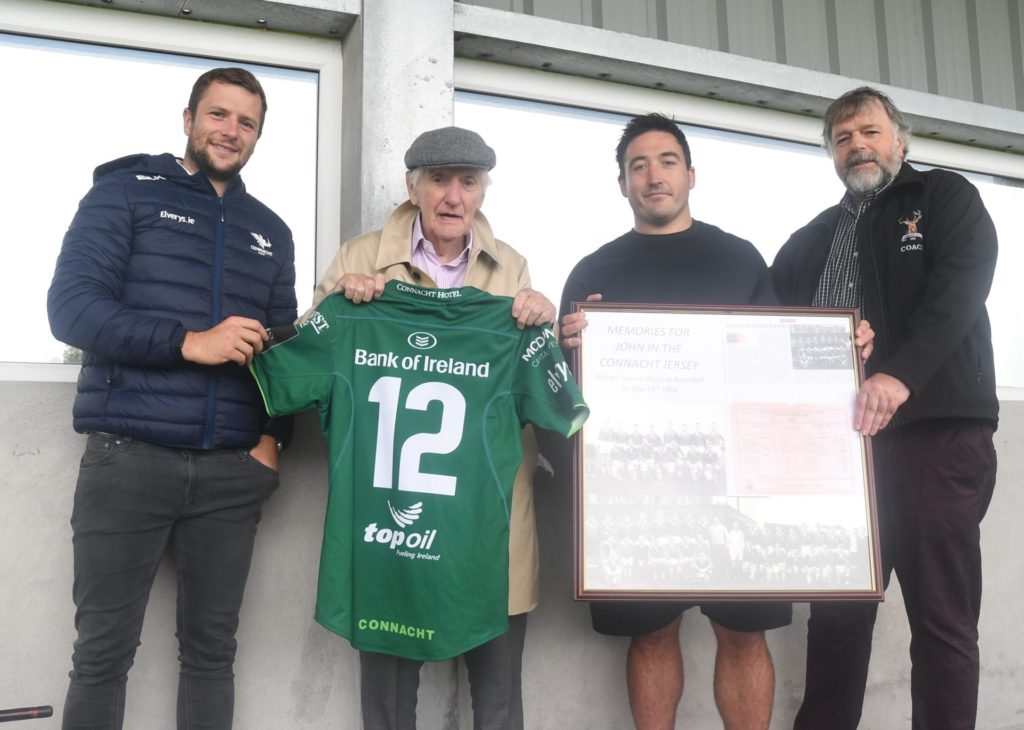 Creggs RFC and Castlerea businessman Anthony Cahill teamed up for a unique presentation to a former Connacht Rugby great earlier this week.

Dr John Dillon, who was in partnership in a GP practice on Barrack Street in Castlerea since 1977, played in the back row on the famous Connacht team that defeated Ulster, 14-5, in Ravenhill on November 19th, 1958.

At the time, Connacht held an Indian sign over their northern opponents. That victory was Connacht’s third triumph on the spin in Belfast, and they would make it four-in-a-row two years later.

However, Connacht would have to wait another 58 years to taste success in Ravenhill when Roscommon natives Jack Carty and Denis Buckley were part of the western province’s outfit that prevailed 22-15 in their Guinness PRO14 match in Belfast.

To link the two victories in 1958 and 2018, Anthony Cahill, Cahill’s SuperValu, Castlerea, in conjunction with Creggs RFC, organised a special presentation at The Green on Monday last.

Jack Carty and Denis Buckley were in attendance where they presented Dr Dillon with a framed memento of the 1958 victory and a number 12 Connacht jersey worn by Bundee Aki.

A quiet, respectable man, it was a fitting tribute to Dr Dillon and his Connacht heroes of 58 years ago, a team that also included Paddy Kilcommins, father of former St. Brigid’s senior footballer Padraig (PK) Kilcommins.

The Dillon family originally hailed from Roosky, while Dr John was also involved in an exhibition match for the Wolfhounds alongside wearing the famous number 8 jersey for Connacht.

Creggs RFC was delighted to host the presentation and would like to thank Anthony Cahill who organised the occasion and the beautiful framed memorabilia of the 1958 match.