Tomorrow, 100 years to the day after the Connaught Rangers regiment undertook their famous mutiny in India, the event and the consequences that fell from it are set to be discussed in a new podcast from History Ireland.

The Connaught Rangers (“The Devil’s Own”) were an Irish line infantry regiment of the British Army formed in July 1881. Between the time of its formation and Irish independence, it was one of eight Irish regiments raised largely in Ireland and drew heavily from the province of Connacht, with its home depot in Renmore, Galway. It was disbanded following the establishment of the independent Irish Free State in 1922, along with the other five regiments that had their traditional recruiting grounds in the counties of the new state.

On June 28th 1920, the regiment went into the annals of British and Irish military history when five men from the 1st Battalion led a mutiny in Jalandhar, Punjab, in protest against martial law in Ireland. Following their surrender a few days later, 88 mutineers were court-martialled, of whom 77 were imprisoned. The leader, James Daly, was executed. The imprisoned mutineers were released in 1923. They returned to Ireland, and in 1936 were granted State pensions. In 1970 the remains of James Daly and two other mutineers were repatriated from India. 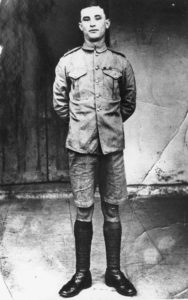 James Daly, leader of the Connaught Rangers, was court-martialled following the mutiny of June 1920.

Tommy Graham, editor of History Ireland, will lead the discussion alongside John Gibney, Cécile Gordon, Brian Hanley and Kate O’Malley. It will be available on www.historyireland.com/podcast-channel/ and https://podcasts.apple.com/us/podcast/history-ireland/id1503109266.

A public talk by Dr. Tony King, Liaison Officer with the Connaught Rangers Association Committee which is based in King House in Boyle, was originally scheduled for April. This will now be delivered once Covid-19 restrictions enable larger public gatherings.