Killoran was our ‘unadorned prince’ 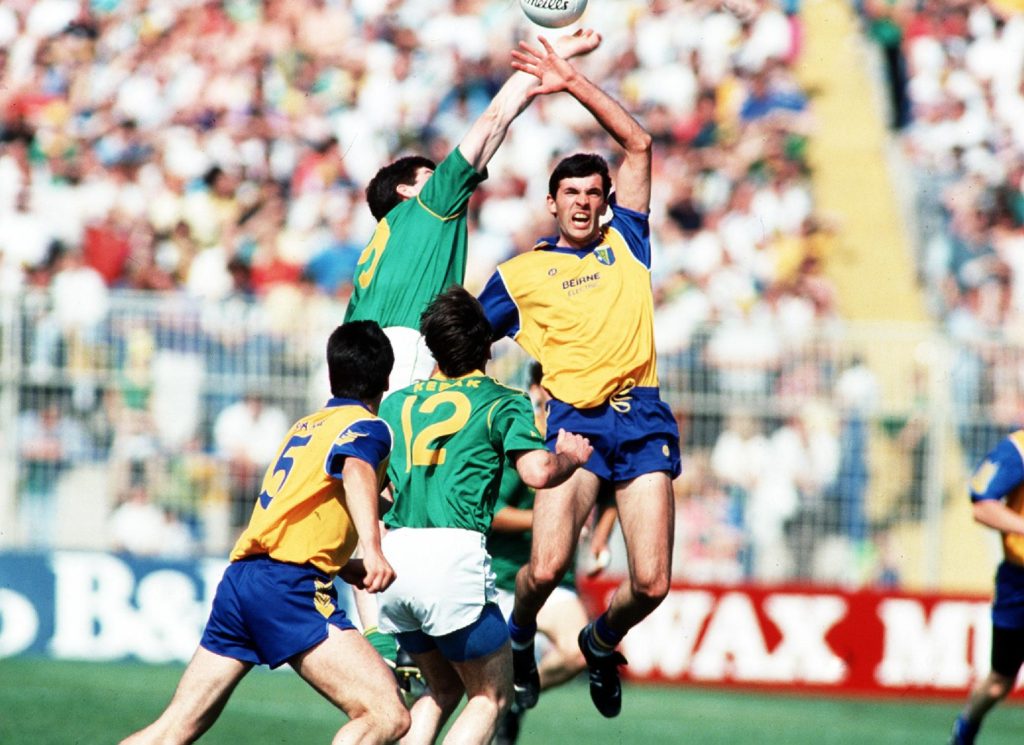 Seamus Killoran in action for Roscommon during the 1991 All-Ireland semi-final against Meath.

Mary Clifford has a claim to fame — she was in St. Coman’s Park for the last championship match at the old Roscommon Town grounds in 1968.

Roscommon were defeated by Galway that day but it kickstarted an affinity with the GAA that has been divided between the Rossies and her native Donegal since then.

When she married her husband Liam in the late sixties, rallying took over their lives. They travelled all around Ireland and to the Isle of Man stewarding at various races. However, when rallying became, in Mary’s words, “too commercialised”, their interest in the sport waned

“We drifted in and out of Gaelic games for a time. But when our children Hilary and Henri came along, we found that going to matches was something we could do as a family,” she revealed.

The family moved to Boyle in 1993, having lived in Castlerea for a few years. Following Roscommon and Donegal has now become an “obsession”.

“Distance isn’t an object for us. We’ll be there. I would say that I’ve been to the 32 county grounds all over Ireland, even Casement Park. We love it,” she declared.

Here’s Mary’s All-Star team from the Roscommon sides she has seen in action.

Gay gave a huge amount of service to the county, plying his trade between the posts from 1977 to 1993.

He always played outfield for his club St. Ronan’s but he was our main goalkeeper. I think he might have lost his place in the team twice but he always battled back to regain it. That’s the mark of a good player.

He was a formidable presence in goal. He was very hard to beat.

I always remember his kickout that led to Derek Duggan’s free in Castlebar in 1991. Against the wind, he lashed the ball out 50 or 60 yards. Seamus Killoran was pushed and Duggan gave us another day out.

There will never be another Harry Keegan. He was one of the best players we ever produced.

His ability to think on his feet was second to none. He must be one of the few players to win three All-Stars in two different eras and not win an All-Ireland.

There were no frills with Harry. He won the ball and got rid of it.

He made a massive contribution, and he would be an idol for any defender.

Lindsay was so tough. When he put his hands up to get a ball, you always knew he was going to win it. He commanded the full-back line and God help you if you dared venture into his patch.

Lindsay was just so physical, not in a dirty way, just a teak, tough defender.

When Tom Heneghan retired in 1979, Gerry had big shoes to fill.

Coming from a small, rural club like Kilmore, it was a big ask but it was no bother to him.

Other players would have found coming into that environment in 1980 intimidating, but not Gerry. He was never worried about who he was marking. You knew that if Gerry contested a 50/50 ball that he would win it.

He left everything on the field. What a pity that injury hampered his career.

To play 178 games for Roscommon is a massive tribute to Seánie’s ability to stay fit in the modern era.

He was small, almost pint-sized, but with the footballing brain he had, he could play anywhere.

Just a hugely talented player that loved a challenge.

You could play Francie anywhere. He was a huge lynchpin in the side. He played under five different managers.

Like Lindsay, he was so physical, but with probably a greater edge. He loved the rough and tumble.

He pulled us out of numerous holes when things weren’t going well. I don’t know where he got his energy from.

Of course, he was part of the Ireland International Rules squad as well.

A really class player with the distinguishable long hair and moustache.

His major attribute was his ability to get the ball and take the most direct route. There was none of this going over and back the field.

He wanted the responsibility of taking the game to the opposition in an effort to get Roscommon as far up the field as possible.

An outstanding player who was revered all over the country.

He had everything but I loved the way he conducted himself on and off the field. There wasn’t a bad bone in his body.

Mayo paid the greatest tribute to him when they carried him, shoulder high, off the field after the 1985 Connacht final. That’s how highly regarded he was.

He never forgot the simpler things in life. He was consumed by football but he always managed to think of other people.

The workhorse of the team who lived in the shadow of Dermot Earley and John Newton.

To me, he was our unadorned prince. A great tactical player with a football brain to match.

When the guy beside you is getting all the praise, sometimes you don’t get the credit you deserve.

But Killoran was there to do a job for the team, and no one did it better.

It’s not natural for a player to graduate from the junior ranks to the senior team but that’s what Karol did when Roscommon won the All-Ireland junior title in 2000.

He was a huge horse of a player. When he ran at defences, he was lethal. He had a shot like a bullet. Some of the goals he scored were fantastic. The opposition’s goalkeeper often never saw the ball going past them.

He could kick fantastic scores off both feet from every angle. To me, he was just a joy to watch.

People will say this is a biased decision given my links to Boyle, but he deserves to be chosen. I wouldn’t pick him otherwise.

He has a laid back attitude, and I think that helps him. He was outstanding in the 2017 and 2019 Connacht finals.

He causes panic in opposing defences. He’s very difficult to pick up. Teams target him because of the aura he has. They either keep the ball away from him or try to intimidate him. That’s a compliment in my view.

He’s at his peak now, and I was expecting big things from Enda this year before the pandemic kicked in.

A huge utility player for both club and county. You could always rely on him to come up with big scores.

He rarely wasted a chance. To know that you had a player in your team that could deliver when the pressure was greatest was a great asset.

He had a great footballing brain too.

The flying ‘Pocket Rocket’ — you could always rely on him to come up with the goods when it mattered.

It’s a pity that St. Brigid’s were going so well at the time because I think we could have got more out of him at county level. It was hard to keep all sides going. He was trying to serve too many masters.

He had natural talent, and he was as good as we had in terms of his ability to kick scores off both feet.

I always felt we had a chance when Frankie was in our team but we should have got more out of him.

An outstanding footballer with a great eye for goal.

Again, he was two-footed, which was a great attribute. When we needed goals, you could rely on Tony to get them.

To play in five Sigerson Cup finals is a rarity. When he was in full flight, he was a sight to behold.

How he had to wait until 1989 to win his first All-Star is beyond me. Players have won All-Stars for far less in my view.

I can’t remember him every playing a bad game in a Roscommon jersey.

As a modern player, younger lads could do worse that take inspiration from what Cathal has done over the last 14 years.

In today’s world, with the pressures of work and family, to stay as good for as long as he has requires serious commitment and dedication.

That will to win has never left him. The goal he got against Mayo in Castlebar last year, when he left Keith Higgins for dead, will always stay with me.

A loyal servant to both his club and county.

While Roscommon have done really well in recent years, I feel that the county team would benefit from a better distribution of county senior football championship titles. Very few teams from the north of the county have enjoyed that feeling in recent times.

Senior titles are what it’s all about. They bring excitement to an area, encouraging more players to stay interested and strive for a place on the county panel.

I’m hoping that a team can bring the Fahey Cup to the north of the county sooner rather than later.