Colm’s priceless archive on the record 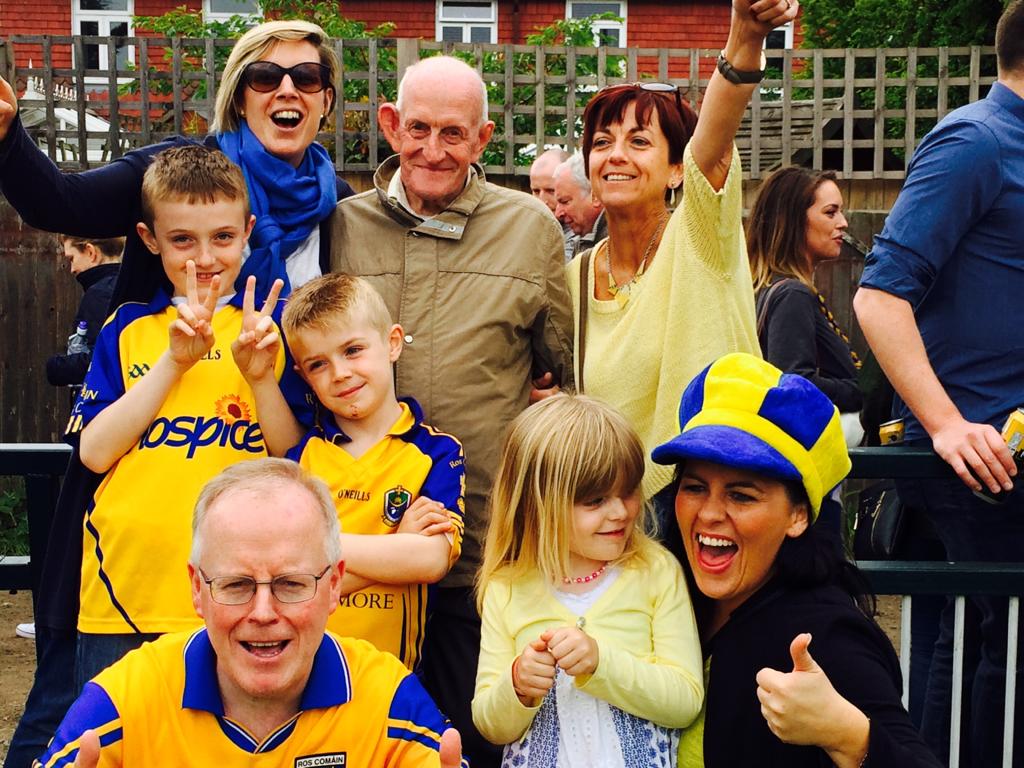 SUPPORTING THE ROSSIES: Colm Hannelly with members of his family supporting Roscommon.

With the possible exception of elite flat racing, there can’t be too many sports in the world where history is as significant in every single contest, as is the case in Gaelic games.

For all the brilliance of modern racing trainers like Aidan O’Brien, good breeding is still vital to success in flagship events like the English and Irish Classics, the Arc or the Breeders’ Cup, and there are plenty of people who would argue that the same applies in football and hurling.

You’d travel far and wide to find another sport where “tradition” is as feared a trait as it is in football and hurling.

The 1990’s Guinness advert spoke of “Standing on the Shoulders of Giants”, with the unspoken corollary that for everyone who was given a boost by those who wore the jersey before them, there is another who is condemned to trying to climb podiums while chained to the remains of fallen soldiers wearing the same uniform.

Anyone who attended last October’s county senior football final could feel the weight of history in the air as Pádraig Pearses had to comprehensively outplay Roscommon Gaels to get over the line, and yet they still only had three points to spare in the end. Scenes in Castlebar in May 2019 were also about much more than Roscommon beating Mayo in a football match, as the shackles of years of hardship in MacHale Park were cast aside.

Waterford is just as much of a hurling heartland as Kilkenny, with a larger population by over 15,000 people, and yet the track record of the two counties in the last century couldn’t be any different. Ditto Galway and Mayo football in Croke Park, Meath and Kildare, Offaly and Westmeath.

Yet so much of this is not down to cold hard facts, but instead more intangible aspects, where trophies won and lost is just one part of the story. Anecdotes get exaggerated, players who won All-Irelands get three inches added to their height and the same to the circumference of their arms.

The old line of Napolean comes into play: “History is the version of events that people have decided to agree upon”.

That’s where Colm Hannelly’s incredible service to Roscommon sport comes into play. The Tarmon man, who entered his tenth decade on this planet last autumn, has never been formally appointed as an official historian for sport in the county. Yet it’s hard to imagine anyone holding a greater claim to the title. If there is a query about who won what, there are no more complete records in the county than those compiled by Colm.

Much like some of his own sporting achievements, fate just steered him in this direction. He told the Roscommon Herald He tells the story of how he first ended up picking up an adult county medal, as a team manager, and that proved to be an indicator of how his long love affair with sport would continue for generations.

“I was picked in goal for a junior championship first round game in 1951 against St. Croan’s, Dickie Hanley was managing the team. I got injured, and then Dickie couldn’t keep up managing the team so they asked me if I’d take over. I did, I picked the team myself and we ended up winning a West Division Junior championship. We beat Kilmurry in the last game,” he recalled.

There were so many turning points in his life that led him to develop a keen interest in Roscommon sport, and Roscommon GAA in particular. Having grown up in a home where Ireland’s national and cultural identity was of the utmost importance to his parents Paddy and Anne, Colm then had the honour of going to Tarmon National School where Dan O’Rourke was his head teacher. That meant that from a very young age he spent almost all of his days around people for whom Irish culture, and the GAA, was afforded huge importance and respect.

His childhood coincided with a golden age for the Tarmon club, who won six county senior titles between 1935 and 1947. The not insignificant factor of being an impressionable teenager at the time of Roscommon’s greatest ever teams, the All-Ireland winning sides of 1943 and 1944, further cemented Colm’s love of the GAA. He became a devoted follower of games in Castlerea, Roscommon and all across Ireland.

Work sent him to Castlebar, where he became involved with the Castlebar Mitchels club, and also to Galway where he was part of a Fr. Griffin’s club that rose to become Connacht club champions and establish a real footprint for Gaelic football in the city into the bargain.

A close friendship with Louisburgh native Johnny Mulvey, who spent 20 years as Connacht GAA Secretary and slightly longer as Mayo Secretary, meant that he was able to stay abreast of official and committee matters as well as those on the field, while outside of the GAA, it would be easier to list the sports where he wasn’t interested than to go through all those where he kept an eye where possible.

Throughout all this, Colm kept notes, and over time those notes — and a willingness to throw himself into research and study for projects that mattered to him — meant that he started to publish record books.

His detailed list of Roscommon GAA teams that played in Connacht finals, All-Ireland semi-finals and All-Ireland finals is as close to an official record as exists in the county, while he also sunk a huge amount of time into completing rolls of honour for club, underage, school and community games competitions, not to mention handball, athletics, and countless other sports as well.

His archive of “Roscommon sporting records” covers everything from All-Ireland winning teams to karate, gymnastics and equestrian achievements, while he also wrote the Castlerea Parish GAA History that covers everything rom 1884 to 2010, an incredible tome that gives detail, life and flesh to the sport in his home town and area.

“I was born a bluffer,” is his simple explanation for how he came to fall into this role – though his incredible eye for detail and accuracy would suggest the exact opposite.

“I just got in the habit of writing down everything I saw. I attended my first Connacht senior final in 1941 and I’ve been at every one featuring Roscommon since then with the exception of the 1947 game in Ballina. No matter what I’m at, I have my notebook in my top pocket and I like to record what I’ve seen.

“Cheltenham, the Olympics, boxing, I’ll follow it all, and I’ve been privileged to see some incredible things in my time. I’ve met some wonderful people from the first days I remember going to games, and that carried on the whole way through my life.”

In a county where the feats of men like Dermot Earley, Gerry O’Malley and the famous heroes of the 1940s have been the subject of books, songs and poems, Colm realised that there were extensive gaps in local records too, and that led him to try and flesh out his own extensive archive of notes with additional details to allow him to publish his books.

This labour of love proved to be incredibly time-consuming, but ultimately yielded what have effectively become the definitive reference books for sporting achievement in Roscommon.

“We love our winners and heroes here in Roscommon, but we’ve also had so many players down the years that have worked hard, been incredibly talented and dedicated, but if they came along at the wrong time, or took part in a sport or at a level that didn’t get widespread attention, then it was hard to find out about them.

“It’s not that I’ve covered absolutely everything, for example I’ve nothing on our county senior teams that didn’t reach Connacht finals. But I got a lot of help from a lot of people when I was researching. Lots of locals went to great rounds to help me out, and if my work proves to be a building block for someone to go ahead and add to it in the future, then that would be fantastic,” he hoped.

In every sport, what is a fantastic achievement today becomes the benchmark that someone else tries to outdo tomorrow — and no better man than Colm Hannelly to appreciate that fact.