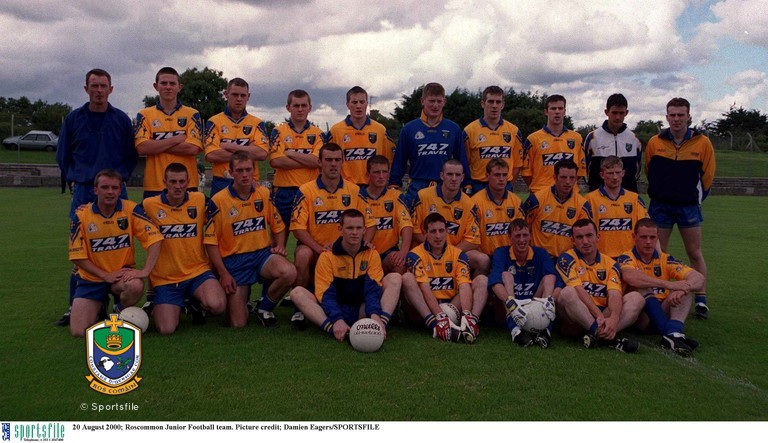 The Roscommon junior football panel that were crowned All-Ireland champions in 2000. Picture: Courtesy of Roscommon GAA

Karol Mannion embarked on an unfamiliar road towards senior intercounty football at the turn of the Millennium.

He never got a trial at minor level and, in his own words, “didn’t make much of an impression with the U-21s”. Winning an All-Ireland junior title with his county was the last thing on his mind.

“I had just started to feature for St. Brigid’s. We beat a very good Roscommon Gaels team that had reached two Connacht club finals but we never showed up against Kilbride in the final later that year,” he recalled.

Despite the seniors’ second-half implosion against Leitrim, Mannion remembers football in the county being in a relatively good place at the time.

“The Leitrim result was a disaster but there was still a lot going for Roscommon at the time. The seniors had pushed Galway all the way in 1998 and the U-21s had come along and won the Connacht title a year later.

“There was still a keen interest in football and I remember Gay (Sheeran) being very positive about the junior team’s prospects, despite what happened against Leitrim.

“They were a good group of lads, a mixture of experienced and older players. Gary Cox and Paul Noone had come in from the U-21 set-up. Then we had ‘Cake’ (Shane Curran) as captain and he brought a lot of enthusiasm around the place,” noted the former county and St. Brigid’s star.

An undistinguished draw against Sligo led to a couple of memorable evenings in Kilglass as Roscommon beat the Yeats County in the replay before going to beat Leitrim in the final at the East Roscommon venue.

“I think it began to come together after the second Sligo game. We had two great evenings in Kilglass before overcoming Warwickshire in the All-Ireland semi-final. It all came together very quickly,” he highlighted.

The final against Kerry took place in McDonagh Park, Nenagh, where a strong finish procured All-Ireland honours for the Rossies — the county’s second junior title following its maiden crown in 1940.

“A lot of people didn’t know about the game. I recall having a conversation with the late Des Whyte about it afterwards and he was mad that he missed it. There was a nice Kerry crowd there because they were on their way to see the seniors play Armagh in the All-Ireland semi-final the next day.

“We played well and it was nice to kick a few scores. I remember Kevin Keane having a great game in the middle of the field. It was nice to find my feet at that level.

“I gained a lot of confidence from it. My club St. Brigid’s was always very supportive of players taking their chance to play with the county teams, people like Peter McHugh, PJ Martin and Ger Aherne.

“We just pulled together. There was a nice vibe throughout. Personally, it worked out for me and I was delighted to be part of it,” he concluded.

Mannion would go on to make his debut at senior level in 2002. His career that would last 12 years, with the highlight being the Connacht championship success against Sligo in 2010.