A Boyle actor stars alongside Normal People’s Paul Mescal in a short film due to premiere at Galway Film Fleadh this weekend.

Jarlath Tivnan, a playwright and actor based out of Galway, plays ‘Denny’ in the new short ‘Drifting’.

The film will premiere at the 32nd Galway Film Fleadh, which is being held online due to the ongoing Covid-19 pandemic.

The short was filmed in Granard, Longford, last year with assistance from Creative Ireland Longford. 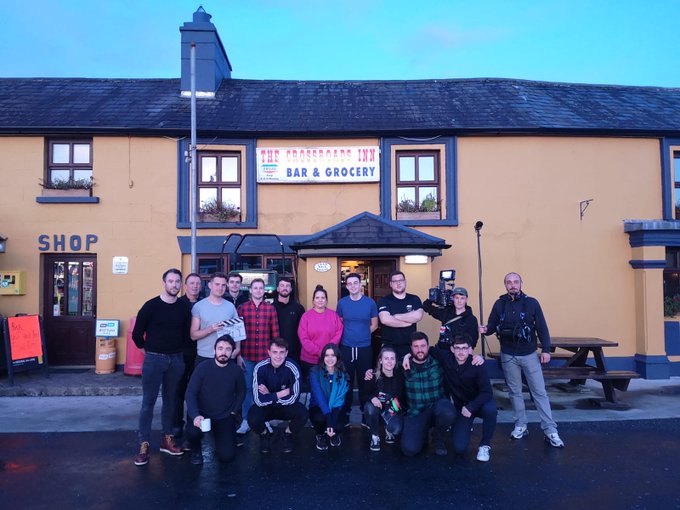 Cast and crew of Drifting in Granard, where the short was filmed. Photo: Harp Media

‘Drifting’ tells the story of Cian and Pat, best friends who have been joined at the hip since they were kids and have the run of their small town in the midlands. Cian is content to coast through a life of booze and casual hook-ups while Pat has grown weary of his surroundings. The film takes place over 24 hours where Cian’s erratic behaviour pushes Pat to breaking point. Jarlath’s character ‘Denny’ is a mischievous fixture in the local pub who always knows the latest gossip around town and always has a betting slip in his hand.

Writer/director Robert Higgins said the crew and cast are “really excited” t0 share the film with everyone.

“This film has been a real passion project for us from the beginning, and the whole community of Granard rowed in behind us to help make it a reality,” he added. Writer/director Patrick McGivney shared the enthusiasm and paid tribute to the “talented cast and crew”.

Jarlath Tivlan starred as Mairtín Hanlon in Martin McDonagh’s A Skull in Connemara at the Olympia Theatre in 2018. He also wrote the play Pleasure Ground, which was inspired by the decline of the rural Irish town.

Jarlath has spoken in the past about how his upbringing in Boyle has had a “huge impact” on his writing style and performances.

‘Drifting’ will be available to view at 5pm on Saturday July 11th. Tickets will be limited to 400 and are available from the Galway Film Fleadh website.