It’s hard to know which is the worse omen – Ireland’s inability to fully reduce the number of new Covid-19 cases each day to a very small trickle, or the ongoing poor performance of the UK and the United States in terms of fighting the disease. Flights between Ireland and America are now moving across the Atlantic each day, while putting in place any form of restriction on travel between Ireland and the United Kingdom would be problematic, both politically and constitutionally.

As a nation, Ireland appears to have lost patience with the lockdown too. Pictures of thronged Dublin streets (below) and evidence of growing numbers of house parties have flooded social media, while mask usage remains infrequent in some places and incredibly rare in others. 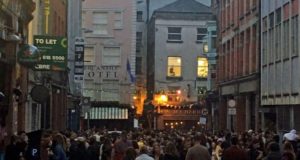 This has led to Ireland’s politicians openly starting to wonder if some of the measures to open up the country may need to be either delayed, or even rolled back. Comments from Taoiseach Micheál Martin yesterday certainly appeared to point in that direction.

However that idea hasn’t sat well with everyone and yesterday, Independent TD for Cork South West Michael Collins suggested in a local radio interview that perhaps consideration should be given to regional lockdowns being put in place, as has been the case in Spain recently.

Right now it may seem like considering either a partial of full lockdown of the country is some time away if it is to happen at all, yet events of last March have taught us that things can change very quickly. By the time the decision is necessary, it will be too late to have a full and thoughtful discussion about it. So perhaps now is the time for people and businesses around Roscommon to think about where they stand.

If a second Covid-19 wave comes with all the ferocity of the first, there may not be any decision to be made. However in the event of pockets or clusters of cases cropping up all around the country, public representatives from this county, and other similar rural counties, may be able to agitate for an exemption to rules that are put in place in the bigger cities, particularly Dublin.

For example, if cases of Covid-19 are concentrated in cities, or indeed tourist hotspots like Westport, Killarney or Galway, could Roscommon argue that if a travel ban is properly enforced on the outskirts of those areas, then there is no need to close down business and trade in places where active cases of Covid-19 are still extremely uncommon. 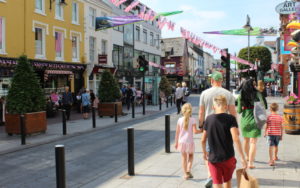 If there was ever a time when the people of Killarney might wish to close the door on American tourists, that time is now.

Some might argue that there would even be an appeal in being open for business when other places are shut. Never mind the famous song Las Vegas in the Hills of Donegal, how about Las Vegas from Lough Ree all the way up to Lough Key! If Roscommon pubs and local gardaí could work together to ensure that they weren’t drawing in visitors from locked down cities, how many extra pints could they sell?

How much of a competitive advantage would non-essential retailers in the county have, if their counterparts in Galway and Mayo were closed down? How much of a boost would it be for the people of the county still to have work to go to, to keep taking positive steps forward, even into the face of another coronavirus headwind?

Yet of course, that comes with risk attached. Staying on full lockdown might keep the county close to Covid-free, opening up might invite in extra cases that wouldn’t otherwise have occurred. Given Roscommon’s age profile and the prospect of losing more lives, that would be a brave decision, probably somewhere between controversial and courageous in the eyes of local politicians. To understand the difference between those two descriptions, the old BBC series Yes Minister has a quote from civil servant Sir Humphrey Appleby that sums it up best:

Sir Humphrey: If you want to be really sure that the Minister doesn’t accept it, you must say the decision is “courageous”.

Bernard: And that’s worse than “controversial”?

At some point however, courage may be required. With a severe recession in the offing, long term capital programmes like the National Broadband Plan are unlikely to be properly completed, with rural heartlands like those here in Roscommon most likely to miss out. There are some hidden gems in terms of tourism here in the county but in both the market for foreign and domestic tourism, Roscommon will always struggle to compete with counties along the western seaboard, or the ‘sunny south east’. With no large multinational employer and significant job losses in the offing due to the closure of ESB facilities in Lanesboro and Shannonbridge, Roscommon could use a meaningful advantage over other regions.

It may be the case that there will never be a better opportunity than this – but if it is to be seized properly, or at all, local public representatives need to be sure that the people in the county are fully on board.