Finally getting back to real life sporting action is a wonderful, emotional occasion for a huge number of people all across Ireland, and yet this championship preview is going to throw a wet blanket on all that by starting with a statistic. Be still my beating heart, say Roscommon Herald readers in one wonderful, sarcastic chorus.

Since the turn of the millennium, there have been 20 renditions of the Roscommon senior hurling championship, of which 13 were won by Four Roads. 2020 will represent their 13th attempt to defend the championship, which they managed to do successfully in nine of the previous twelve.

What this means (at least in this writer’s interpretation!) is that if you intend to bridge the gap with Four Roads when the Tisrara men are on top of the pile here in Roscommon, you won’t do it quickly. Even if they’re coming back to meet the pack, they’ll dig their heels in and fight every inch on the way down, as opposed to simply falling off the cliff face entirely.

Now cast your mind back to Waldron Park in Athleague last October, when Joe Mannion’s charges comprehensively outplayed Athleague to record an 11-point win. They were similarly dominant against Pearses in the semi-final, and this was with a transformed side that was featured a lot of new faces. When the big games came around, they proved they were head and shoulders above the rest once more, to the point that they have a long way to fall before any other club can realistically aspire to go into a knockout game against them as anything other than big outsiders. There’s no evidence that their trajectory is anything other than upwards.

Not alone would that have to u-turn, but substantial improvement from any of three or four potential usurpers of their crown would be needed as well in order for this year’s Mickey Cunniffe cup to go anywhere other than the home parish of the man himself. 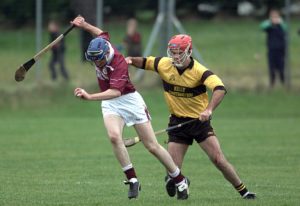 Mickey Cunniffe in action for Four Roads in 2001. Who will lift the cup that bears his name 19 years on?

On the face of it, it’s hard to see where that improvement will come from. Tremane might have fancied their chances with Seamus Qualter at the helm but suggestions of an injury to Niall Kilroy won’t help. Two group games that could easily consist of a handy win over Roscommon Gaels and then a bout of shadow boxing against their neighbours, Athleague, isn’t ideal either.

Athleague themselves have lost their main scorer in Eamon Flanagan, and a potential game breaker in Aengus Lyons. Only a handful of players held their own in last year’s county final – Flanagan, and perhaps three or four defenders that are in the latter stages of their career. It’s not easy to envisage them making significant progress, as even holding their ground may prove tricky.

Pearses will always be physical and competitive, but that’s no use if you can’t score enough, and that’s a huge problem for the Woodmount men. Daniel Glynn’s return might have been seen as a panacea in that regard, but he too is on the treatment table and unlikely to see any action. There are some excellent young hurlers in the club but no-one who looks ready to shake up the senior championship in the next month or two, so barring a hugely attritional campaign, going beyond the last four might be more than they can manage.

Until Oran and Roscommon Gaels get their best players on the field, or most of them at least, they can’t really feature in a meaningful conversation about potentially winning a championship, which leaves just the enigma that is St. Dominic’s to consider.

There are a myriad of reasons to mistrust the Knockcroghery men when it comes to taking on the more consistent powers on the local scene, yet there is one why they might just be capable of threatening an upset: the match winners in their ranks. Mickey Joe Egan, Naos Connaughton and Tommy Doyle are all capable of playing man of the match roles if the sun hits their back in the right way, and in a championship where there isn’t time to put in place elaborate tactical systems, a return to traditional “man on man” hurling might suit the club that has a number of different scoring threats, as opposed to those that get over 50% of their scores from frees.

All that said, there’s a big jump from marking a club out as the most likely contenders, and for them to actually contend. Statistics, history, age profile, depth of talent and a settled squad of players and management all point to a comfortable title retention for Four Roads.

Perhaps there’s an upset somewhere along the line, or perhaps they’ll win five games on the bounce without anyone laying a glove on them. The most likely outcome is somewhere in the middle – that a challenger will emerge from the pack, but that the champions will find a way to come through nonetheless.

Pearses and Athleague to contest county final as champions crash out