Superb second half goals from Mark Sherlock and Daragh Concannon proved decisive as St. Peter’s secured their third RDFL Premier Division title in succession tonight, pipping Castlerea Celtic by a single point thanks to a 3-2 win over the West Roscommon side in McCarthy Park. 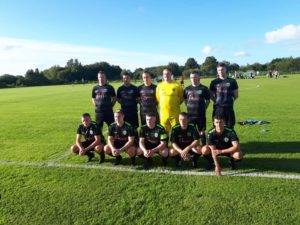 The first half was a hotly contested and occasionally feisty affair, with referee Gerry Carmody dishing out six yellow cards in the 45 minutes. A volley from Mark Sherlock put the home side 1-0 up after 14 minutes, but Castlerea Celtic were a match for the reigning champions in most facets of the game and deservedly pulled level through Jack Higgins shortly before half time.

St. Peter’s moved things up to a different level after half time however, inspired by their veteran striker. It took just 90 seconds of play for Sherlock to add his second goal, a majestic finish from 18 yards after some outstanding footwork on the edge of the area to carve out half a yard of space.

Sherlock also drew the free that Daragh Concannon curled up over the wall and into the top corner to make it 3-1 with 25 minutes remaining and while Peter Farrell slammed in a close-range goal to set up a nervy finish, the home side held out to secure the honours.