Roscommon SFC preview – don’t get too hung up on “hunger”

For a nation that lived through a devastating famine that left a permanent scar on our country and our psyche, Irish people have quite strong romantic feelings for the idea of “hunger” as a concept. On the GAA field in particular, there’s a great love for the idea that the win will usually go to the team that wanted it more, as opposed to the team that got a lucky break for a key goal, or simply the team that had the better players.

Similarly, any time a team fails to retain a championship, you’ll do well to escape a clichéd summary about how they didn’t have the same hunger as before, and that this was their downfall.

But what happens when “hunger”, instead of driving you on to better things, actually acts like real, actual hunger? When you don’t transform into some ravenous bear, instead you become weak and nervous, acting with trepidation and doubt. Put it another way – is there anybody out there who truly believes that Pearses’ “hunger” was an asset to them over the last 10, 20 or 30 years, instead of a source of anxiety and fear in the closing stages of winnable games? Even their county final win, when it finally came, was one of those remarkable games where the men in red had to be ten or twelve points the better team in order to scrape over the line by a single goal.

This year, the only change in Pádraig Pearses is that this fear is gone. The weight of history has been lifted off their shoulders, but in terms of football, they remain the same powerful, talented and tenacious group that they were in 2019.

Logically speaking, this could – and perhaps should – be enough to propel them onto a long and prosperous run of success. With the exception of an injury to Mark Richardson, they will go into the championship this week with a settled management team, a proven group of players that are largely at the peak of their careers, and the knowledge that they know how to win tight games now. 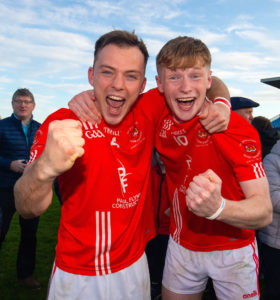 The absence of Mark Richardson (left) through injury is the only black cloud on a bright horizon for the county champions. Picture: INPHO/Tom O’Hanlon

There is no team that will be better off for taking three months off, but one could argue that Pearses are better suited to dealing with these unprecedented circumstances than anyone else. And given that they started on top of the heap, it’s impossible to assess them as anything other than the strongest of favourites right now.

For a lot of the same reasons, the most likely contenders out of the chasing pack could be Boyle, who share some of Pearses’ best attributes. The Abbey Park outfit have plenty of county players to show leadership, including a handful of players who are capable of winning a game through sheer individual brilliance, a management team that knows the players very well, and they certainly won’t fall short on the hunger side.

Clann na nGael suffered the indignity of being the first team eliminated from the 2019 senior championship and there’s no doubt that Liam Kearns would have learnt a lot from a full O’Rourke Cup campaign. Without that preparation they still have a chance, but not as much as might have been the case. Fergal Lennon’s return is a massive boost to their chances and while they’re still a quite young side with a lot to learn, the hard days they had in 2019 will stand to their large cohort of 19, 20 and 21-year olds.

After that, it gets harder and harder to make a strong case for any team. St. Brigid’s have undergone a huge amount of transition and they needed a league more than most. One could argue that St. Brigid’s in 2020 are exactly where Clann were 12 months ago, and while they won’t end up in a relegation dogfight, improving on last year’s quarter-final exit won’t be easy.

Roscommon Gaels will get out of their group, most likely by topping it, and it would be a surprise to see them miss out on a spot in the last four, but going further will necessitate finding three or four points of improvement from somewhere. It’s hard to see how they can deal with the loss of Cian Connolly and get better at the same time.

One of these years, age will finally catch up to Western Gaels. Fergal O’Donnell will probably beat back the tide for another while but until their fortunes change at underage level there’s a limit to their potential. It would be no surprise to see Strokestown and Michael Glaveys overtake them decisively in the pecking order this year, though both of those clubs are still a few players short of the level needed to go beyond a semi-final.

As for the rest, all the hunger in the world is no use in the context of winning a senior championship if you don’t have the raw material in the shape of sufficiently talented and deep panels, and there isn’t any other club that ticks those boxes.

The world may be a topsy turvy place in 2020 with unprecedented and unimaginable events changing all our lives, but one thing that might stay the same is the identity of the county senior champions. It’s not all just about the hunger.