A fascinating piece in the Times UK today revealed how “six locations in Ireland were discussed by government officials as possible sites for a new autonomous city, named Nextpolis, proposed by a wealthy Hong Kong businessman”.

The article goes on to name the locations that were brought up in the discussion:

Documents released under freedom of information laws show that a series of meetings have taken place in Ireland and Hong Kong in recent months about sourcing a 500 sq km area of land for the new city.

Understandably, those raised in the collective culture of far east Asia, where the perceived “common good” is valued much higher than the rights of individuals, might struggle to appreciate the scale of the challenge in trying to simply acquire an area of land the size of perhaps two rural parishes to simply plonk a city in there, yet perhaps in Ireland it may be time to start thinking outside the lines a little bit.

For too long, regional development in Ireland has consisted of building houses in rural areas, then trying to build a good road from that rural area up to Dublin. Organisations like the IDA draw criticism for their inability to bring significant numbers of large companies to places like Roscommon, yet too often, our national mindset makes it incredibly difficult for regions – like this county – to carve out an individual identity.

That mindset is that which involves every area keeping one eye on their home turf, but one eye across the border to make sure that their neighbour isn’t getting away with anything. This is a parochial society, and on the weekend that the club championships are set to resume, let’s be clear: that’s not a bad thing. The ferocity with which Irish people feel pride in their home place, and our commitment to fight and serve to that end, is a wonderful attribute and the strength of our local GAA clubs is a testament to that.

However there comes a point where trying to share everything becomes counterproductive, much like the Judgement of Solomon. 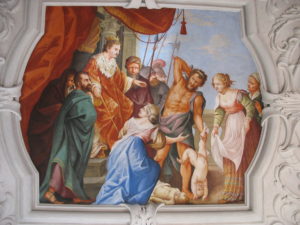 A Fresco of the Judgement of Solomon, on show in Frauenberg, Austria.

This was very much to the fore when former Minister for Finance Charlie McCreevy introduced his decentralisation plan in the early 2000’s, a potentially transformative idea that floundered because every county in Ireland had to be seen to take something from the pot. In America, the concept of the state capital and all the associated functions residing a long way from the largest city in the state is widely accepted – the most obvious examples being Albany in New York, and Sacramento in California. On a national level, Brazil went a similar route, installing Brasilia as the capital to take some of the population away from Rio.

If Ireland had gone this route, and for example moved the capital of Ireland to Limerick (where there are good air, rail and road transport links, ample room for expansion, third level colleges and an ideal location on the opposite side to the country to Dublin) then perhaps today we wouldn’t have the housing crisis that we do. Instead, local politics came to the fore, and so married couples and other partners found themselves in a situation where one person was sent to Wexford and the other to Galway. City natives who have only ever known urban living were asked to relocate to places like Birr and Belmullet. Young travel enthusiasts were asked to go to West Donegal, three hours from an international airport.

Naturally, the whole project failed to ignite, and not too many tears were shed as no single county benefited to any great degree. In a nutshell, local politicians acted like the mother in front of King Solomon that was happy for the baby to be chopped in half.

Even today, the same spirit abides. At a time when holidaying at home is the only option for the vast majority of Irish people, every county is putting their hand up to get “their fair share” of the tourism spend. Now I’m an Offaly native, and I love my county – but the idea that a young family would find it as easy to keep the kids entertained in Tullamore as they would in Westport, Dingle or Lahinch is plainly daft. 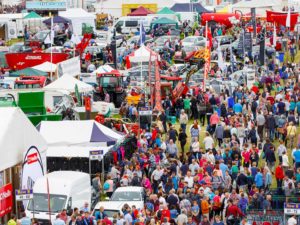 Scenes from the Tullamore show. A great way to pass a day, but that’s just one weekend out of 52.

Surely it would make more sense for some counties – Roscommon included – to by all means promote the merits of places like Lough Key or Strokestown House, but to accept at the same time that this county needs to carve out its own niche, not to simply demand 1/26th of the focus of every government initiative be pointed here.

In an era when remote working is about to take off, perhaps Roscommon could look at trying to be national leaders in this regard. Imagine an office block in Roscommon town that could house 1000 workers, with the fastest broadband speeds in Ireland, with natural synergies of companies in the same tech sectors, and with childcare, catering, and all the other ancillary facilities that one might expect in the headquarters of a company like Facebook or Citibank.

Or perhaps scaling up innovative projects like the Hub in Castlerea, with greater incentives for creative food producers, are the way to go. With such diversity of landscape, Roscommon could offer so much in terms of photography, media, promotional and advertising work.

The way of the modern world is for companies in the same field to gather in certain areas, such as is happening at the pharmaceutical hub in Monksland. Some businessmen in Hong Kong were also able to see this. Is it too much to ask, for Roscommon and for Ireland, that someone here might see the same?