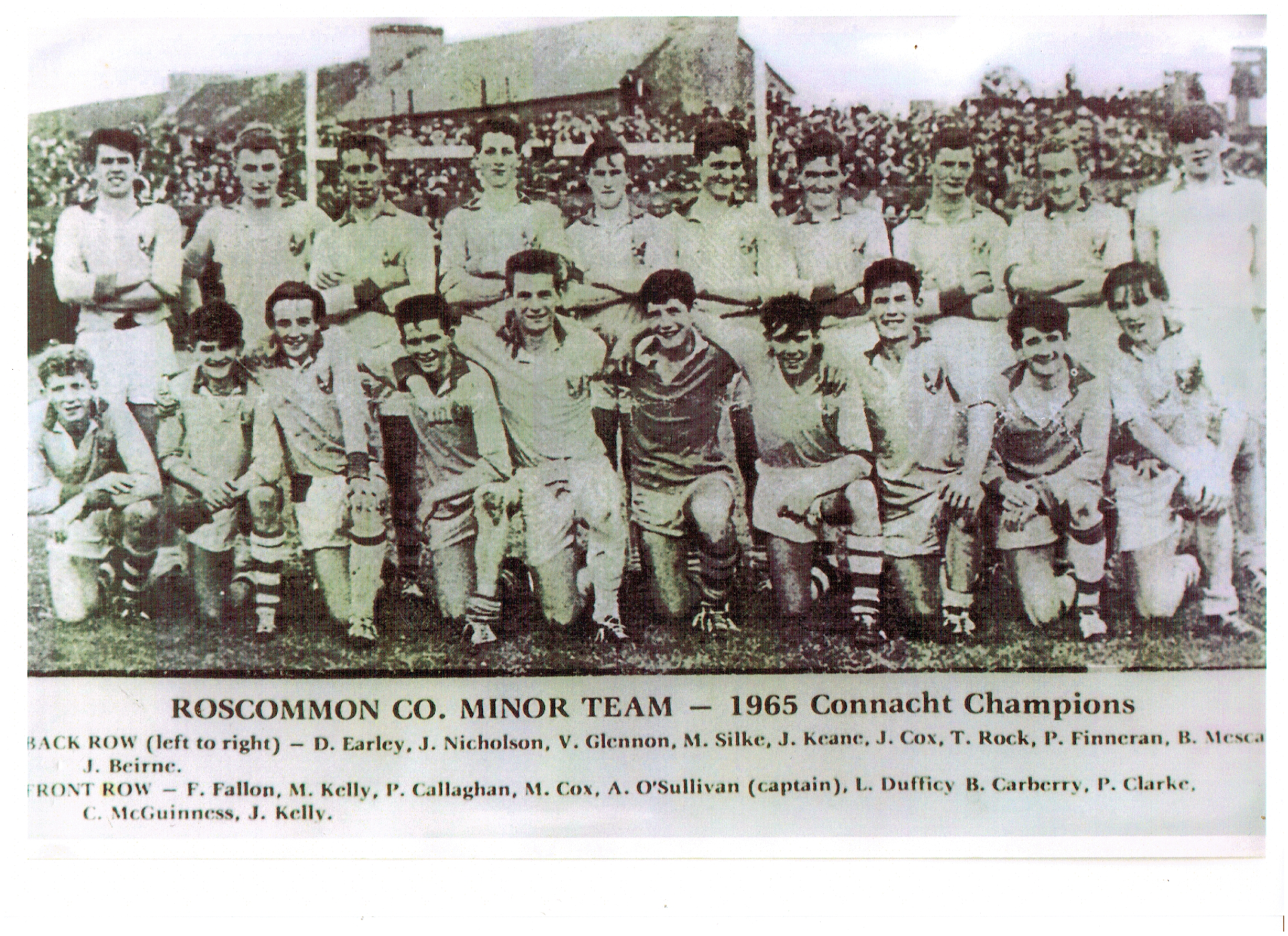 Adrian O’Sullivan of Barrack Street, Castlerea was an outstanding footballer who gave great service to his clubs, both Castlerea, St. Kevin’s, and Roscommon county football teams in all grades. He played most of his football at centre-half back but was equally at home at centre-field or in the forward line. I had the pleasure of training him all during his football career with the club since he first started playing as an eleven-year-old with the juvenile U-15 team in 1960, and I was also a selector when he played on the Roscommon minor teams of 1964\65\66 and a senior selector. In his last few years as a senior county player. He was a civil engineering lecturer at Limerick IT and during those years he used to train with Kerry greats, Denis Ogie Moran and Paidi O’Shea. He also worked in Carlow IT and trained the college team with the great Laois footballer Bobby Miller and in Dublin where he was a great friend of Dublin footballer, Tony Hanahoe. He also worked in Tipperary but no matter where he worked, he always remained faithful to his club and would travel home each weekend to play for them.

He always kept himself in good shape. Sometimes he would train on his own. I remember one night at training he said that he could not train due to hamstring injury and that he was a doubt for Sunday’s game. The players and I at training looked at one another with dismay, as it was the first time, we had heard of such an injury. Hamstring or no hamstring he played on the Sunday and gave an outstanding display as always and as he stated himself years afterwards ‘that the injury was all in his mind’. He had great success with his club, and he loved the big occasions especially county finals, where he would always give of his best and tormented his rivals. But he always played the game as it should be in a sporting manor.

He played county football for Roscommon at U-16 Fr. Manning Cup Minor, Junior, U-16 and senior.

He captained three teams to win Connaught Championship, the only Roscommon player to do so, indeed for that matter, I do not know of any other player in the country who has achieved this.

He captained the minor team in the 1965. Other Castlerea players on that team were: Padraic O Callaghan, Martin Silke, Michael Kelly, and Paulo Hayden.

He captained the U-21 team in 1969 other Castlerea players on that team were: Mickie Freyne, John Kerrane, John O’Callaghan.

He captained the senior team in 1972 and other Castlerea players on that team were Harry Keegan, Tom Heneghan, John Kerrane, Mickie Freyne, Jimmy Finnegan, Martin Silkie.

He made his senior debut for Roscommon in the Connaught Senior Championship against Sligo as a nineteen-year-old in 1969 and he played his last senior game, a challenge game against Armagh, in Boyle in 1976. He won a Cardinal Cushing Medal in 1973 with Roscommon in New York. He played Railway Cup for Connaught in 1970\71\72.

He played most of his football for the county at centre-half-back, where he gave some outstanding displays, none more so than against Kerry in the 1972 All- Ireland semi-final. Indeed the great Gerry O’Malley, R.I.P, who was Roscommon greatest centre-half- back of all time, often said to me that O’Sullivan was the best centre-half-back to play for Roscommon since his own time and that was a fine tribute from one of Roscommon greatest footballers. He also played centre-half-back for Summerhill College, Sligo in the 1960’s and had some great battles with St. Jarlath’s College and Galway’s Jimmy Duggan when they would meet. Duggan used to play centre-half-forward on the Jarlath’s teams. His late uncles, Cannon John Kelly and Fr. Leo Kelly also played Minor football for Roscommon. Fr. Leo won an All-Ireland Minor with Roscommon at Left Corner Back in 1941, while Cannon John won a Connaught Colleges Senior A with Summerhill College, Sligo in 1930. Other Castlerea players on that team were Joe Connolly, J.P O’Callaghan, Paddy Flynn, Willie Madden.

Adrian has still a great interest in football and follows the teams of Castlerea St Kevin’s and Roscommon teams.