From a cuckoo clock to onion sets, a lottery ticket to a fishing licence Flynn’s Shop in Castlerea has it 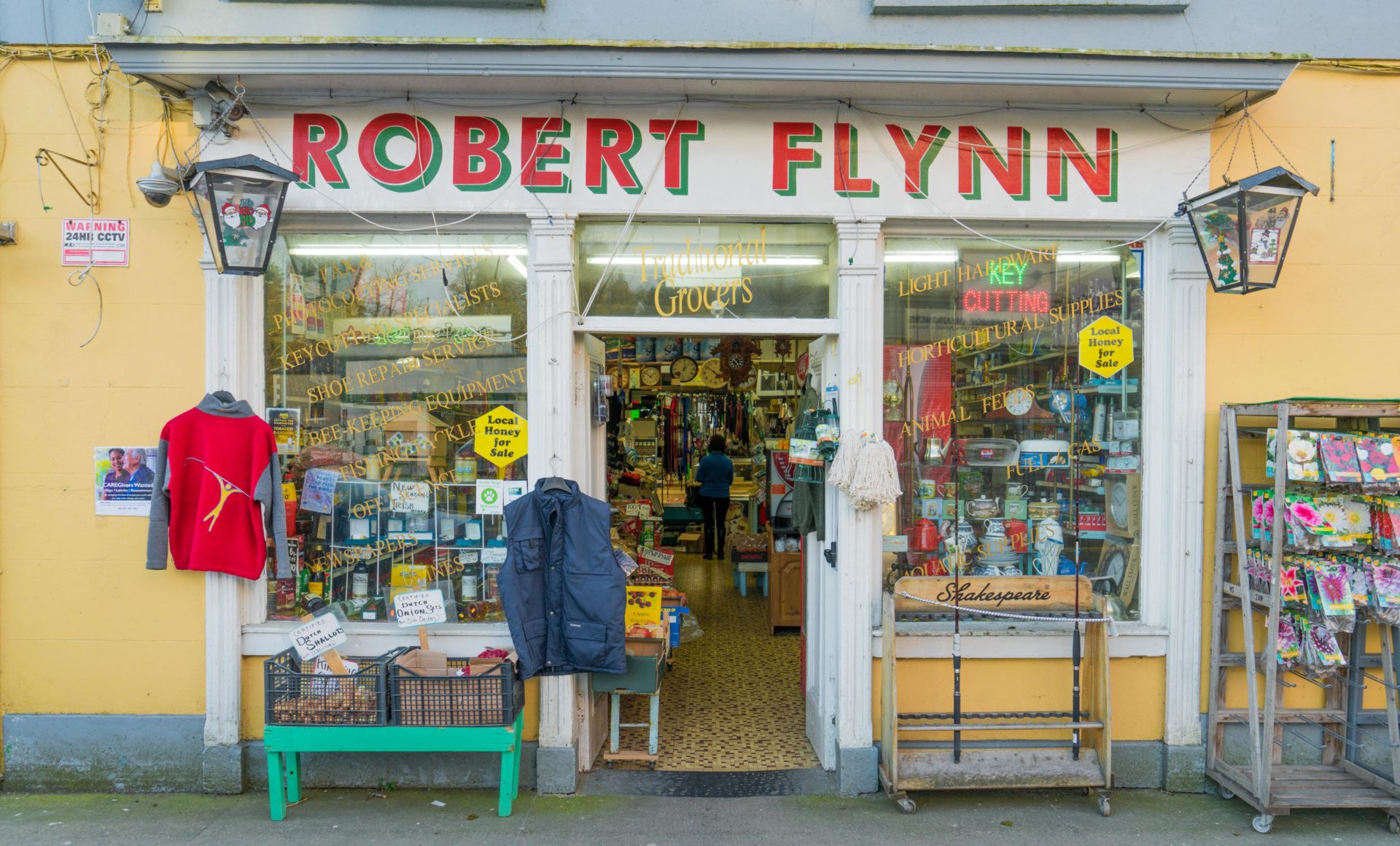 Whether you want a cuckoo clock, gripe water for the baby, onion sets, a lottery ticket, a fishing licence or anything in between, Flynn’s Shop in Castlerea has it. Pic. Gerry Faughnan

Covid-19 or the coronavirus may be the word that causing considerable public concern at the moment, but for one long-serving shopkeeper, the virus is just another obstacle to endure during a long and illustrious retail career.

Tom Flynn’s shop, located in the heart of Castlerea, has been serving the retail needs of people since 1945. This year, in fact, marks the two hundred anniversary of the shop opening its doors as a retail space.

In that time, consumer habits have changed and evolved but the Flynn name continues to endure as a shop where values such as customer care, quality produce and an ‘olde world charm’ have never died. Not only that, but Flynn’s renowned as a ‘go-to place’ for those unusual household items which can be elusive to find.

The current Covid-19 outbreak hasn’t prevented Tom and his staff from continuing to trade in the heart of Castlerea. But it has caused Tom to reflect on the public health crisis before and the enduring spirit of people to overcome crisis in previous generations.

“I remember as a young fella my father telling me stories of the Spanish ‘Flu between 1918 and 1920. That devastated the country. My father Robert that time worked in Patrick Claffey’s opposite the church on Patrick Street.

“Claffey’s was a well-known grocery, hardware and bar at the time. Like many businesses that time, it had everything under one roof. My father was a young man at the time, around twenty, when the ‘flu outbreak first hit the country.

“Claffey’s had about sixteen staff at that time. Believe it or not, most of them lodged on the premises then. Yet the ‘flu killed an awful lot of people in the country and in the wider Castlerea area that time. About 23,000 people died in Ireland alone during those years.

“About half of Claffey’s staff went down with the ‘flu. But none of them died. My father was one of the people mounting coffins for those who had died from the ‘flu. But he didn’t get it as he used to inhale Lysol from a handkerchief.

“Lysol was like Dettol is now. And though you can still get it in America, for some reason, you cannot get it here. But with bodies coming in for burial and many others having the ‘flu, my father was saved by inhaling his handkerchief with the Lysol.

“Every evening, when the day’s work was done, all of the staff in Claffey’s would kneel down and say the rosary. I don’t know what kept him safe and though the Lysol did help, he was doing very difficult work at that time,” says Tom.

Robert Flynn worked in Claffey’s from 1912 to 1928. A native of Cleggernagh near Fairymount, Robert moved to Boyle to set up a new business in what is now Geraldine Sheerin’s on Patrick Street in the town, before departing in 1945.

With ever a keen eye on a business opportunity, Robert, returned, as was always his ambition, to Castlerea to set up a new business. Today, his name still adorns the front of the business, despite his untimely death in 1965 which was Tom succeed his father in the running of the business.

“My father had rented his shop in Boyle, so when the opportunity arose, he returned to Castlerea and bought the premises for the then sum of £4,000. He had £2,000 himself and he borrowed the remainder. £4,000 was an awful lot of money in those days.

Now an ever sprightly 82 years young, Tom also remembers the scourge of tuberculosis (T.B.) and its effects upon the local population. “In the 1940’s and 1950’s, there was a Funeral almost every day that was connected to T.B.

“The man who wired our house here died from T.B. There was hardly a family in the area that wasn’t affected by it. T.B. was different to the ‘flu – you could have the condition for a long time, whereas with the ‘flu, its effects are pretty quick.

“We had the Sanatorium here in Castlerea for many years (now the site of the current Prison). There were people in Hospital for years because of T.B. People were really scared of it. The Sanatorium was a fearful place.

So, despite the ongoing uncertainty, it’s business as usual for Tom. And why not? After all, the Flynn family name has been a staple in business life for over ninety years and that constant shows no sign of waning any day soon for Tom.

“We have our glass counter here in the shop which we wash regularly. We also have a bottle of Dettol mixed with water with which we constantly wash our floors. We’re open the whole time and thankfully, there’s been no drop-off in business.

“It’s important people realise we are also selling hand sanitisers, washes and rubber gloves from the store. Of course, I’d be concerned about getting it (the virus) myself, but I’ll keep safe but I’ll do what my father did and other people did years ago.”

One of Tom’s abiding passions is his involvement in the Castlerea Brass and Reed Band whose activities, not surprisingly, are currently suspended. “I miss that and I missed going to the St. Patrick’s Day parades and matches,’ laments Tom, who plays the trumpet. He also enjoys a long association with the Castlerea Musical Society.

Yet Tom remains an optimist at heart – he has to be, having endured the slings and arrows of business life for over fifty years. “Of course we’ll turn the corner on this – we have to. This shop is open two hundred years ago this year. The first name over the door was ‘McDonagh’ then my father bought the shop off a Mr. McCormack.

“I enjoy being involved in the shop – what else would I do,” says Tom, who is a man of deep Christian conviction, but doesn’t wear his heart on his sleeve, as it were. What’s more, he’s ably supported by his sister Angela and assisted by Kenneth Malone and John Greaney, who have been pillars in the business for many years. 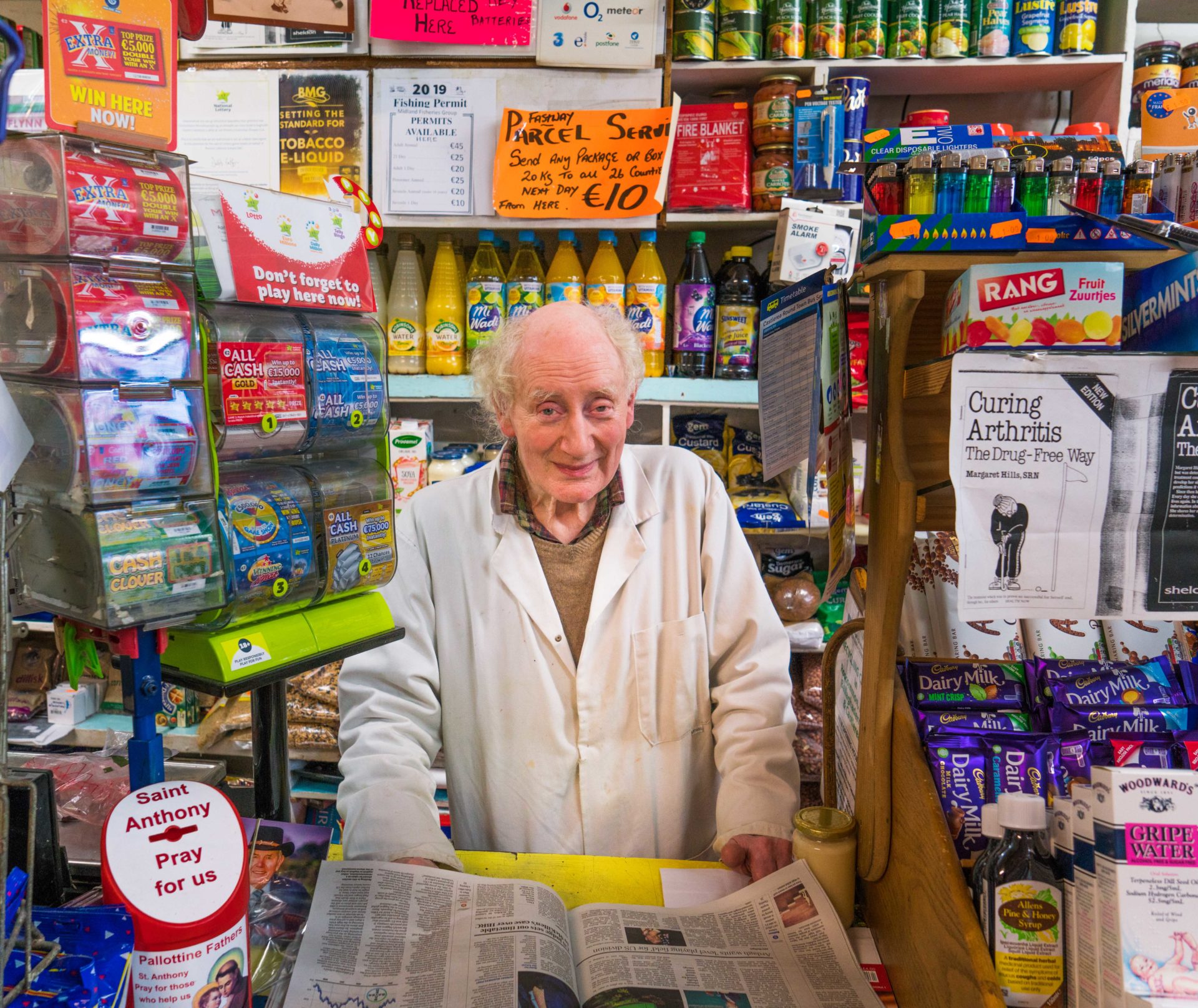