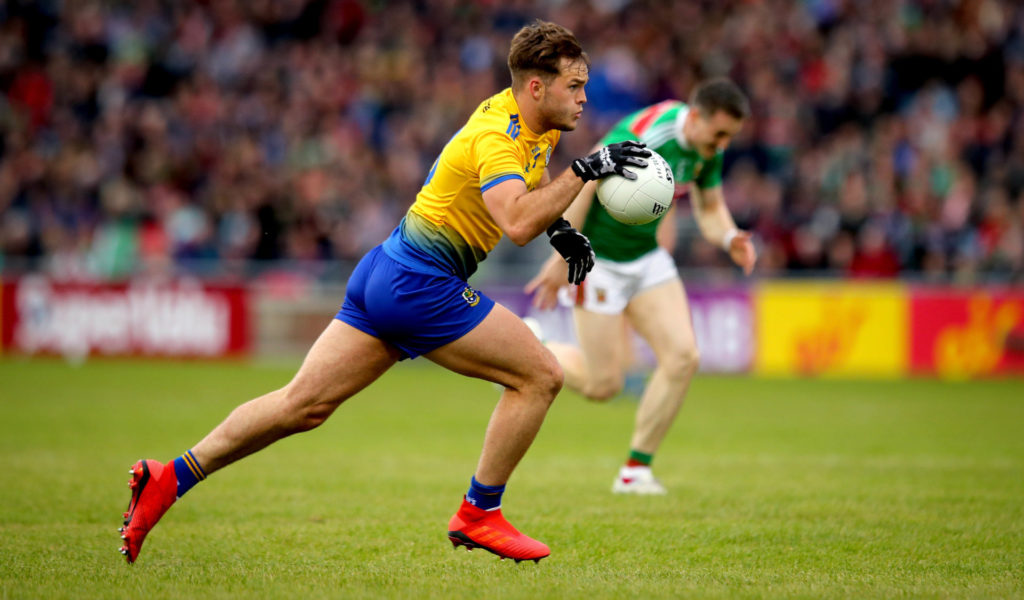 Ultan Harney was involved in competitive action for the first time in over a year this evening as he was introduced during Clann na nGael’s victory against Elphin.

Ultan Harney made a welcome return to competitive action for the first time in over a year as Clann na nGael guaranteed a championship play-off at least with a hard-fought 0-11 to 0-8 victory against Elphin at a wet Orchard Park on Saturday evening.

Harney hasn’t played since suffering a knee injury in the run-up to last year’s Connacht final, and his introduction for the final ten minutes helped Clann keep Elphin at bay.

The home side were 0-5 to 0-4 ahead at the interval but Clann upped the ante after the break, with Jamie Fahy, Donal Shine, Ciarán Lennon, Cathal Shine and substitute Conor Farrell kicking some fine scores from play to eke out a deserved win for Liam Kearns’ side.

The result leaves St. Brigid’s and Clann tied at the top of Group A, but the big losers were Strokestown who now must prepare themselves for a relegation play-off, irrespective of how they fare against Clann in their last game.

Roscommon Gaels got their championship campaign back on track with a 1-15 to 0-12 triumph against St. Croan’s at Kiltoom. However, the victory came at a cost as both Richard Hughes and John McManus received straight red cards in second-half stoppage time, as did St. Croan’s forward Cathal Connelly.

Peter Gillooly, with 1-6, and Scott Oates, with 0-4, did most of the damage on the scoreboard for the Gaels.

Boyle survived a major scare as they just about managed to beat Tulsk by 1-10 to 1-9 in the day’s early game at Strokestown.

A Mark O’Donohoe goal put some breathing space between the sides early on but a goal from Tulsk substitute Daniel Connolly in injury-time threatened to throw the cat among the pigeons. But Boyle, who never reached the heights of six days earlier against Pádraig Pearses, were able to hold on in a nervous finale.

Kilmore produced the result of the evening in the intermediate championship as they clipped the wings of high-flying Éire Óg at James Timothy Park, Loughglynn. Oisín Boland and Paul Garvey grabbed the crucial goals in a superb 2-13 to 0-13 victory for Cian Smith’s troops.

Oran were far too strong for Castlerea St. Kevin’s at O’Rourke Park as goals in either half from Jack Earley and Ciarán Lawless procured a comfortable 2-15 to 1-7 victory for Billy Donnellan’s side.

There was plenty of drama in Group B as Man of the Match Diarmuid Murtagh landed a brilliant long-range point at the death to deny a brave Kilbride challenge in a thriller at Rockfield.

Kilbride, who led by 3-6 to 2-8 at the break, probably deserved a draw but Man of the Match Murtagh, who kicked 1-6 over the hour, broke their hearts in additional time to secure a high-scoring 2-17 to 4-10 triumph for his side.

Creggs will join St. Faithleach’s in the quarter-finals following their 2-12 to 0-9 victory against St. Aidan’s at Creggs.

Two sensational goals from Noel Gately alongside the scoring prowess of Shane and Ronan Dowd proved to be the difference between the sides.

*Remember, the only place you can read match reports from all 12 games in this weekend’s Roscommon Senior and Intermediate Football Championship action is in this Tuesday’s Roscommon Herald