Thousands weigh in behind “The Grind on the N4”

A decision by Roscommon County Council to close down a mobile coffee business located on the N4 close to the entrance to Lough Key Forest Park has been met with widespread disapproval online, with huge numbers of people weighing in to support the campaign to keep “The Grind on the N4” in business.

The Grind Coffee Cart is the brainchild of Danny O’Neill, a 26-year-old resident of Cloonloo, who has been trading at this spot on the N4 for a little over a year and a half. A chef and baker by trade, O’Neill bought his cart and equipment and after obtaining HSE clearance and insurance cover, he began trading. Things were going well until he was asked by Roscommon County Council to cease trading in a letter two weeks ago, and yesterday officers of An Garda Siochána arrived to enforce a closure of his business.

“At the time there were no bye-laws covering casual trading locations, and I enquired in several counties as to what the requirements were,” O’Neill told the Roscommon Herald.

“I did everything that was required in terms of getting things set up the right way, and since then I’ve been working 16 and 18 hour days trying to get the business off the ground. I’ve got a hugely loyal customer base, a lot of truck drivers, guards, frontline medical staff and others have become very regular customers of mine.”

Many of those customers have now signed Danny’s online petition (here) seeking to reverse the decision of Roscommon County Council not to designate his location as a casual trading spot, in line with the new legislation. A Facebook clip, where Danny outlines the situation that has led to his business being shut down, has been viewed over 30,000 times.

“I’m hugely disappointed, as it seems to me that now is a time when local authorities should be doing all they can to encourage local businesses and young entrepreneurs as we try to get the economy going again. I don’t have a fixed premises so I don’t pay rates but I pay taxes, insurance, I source my coffee from local suppliers in Carrick-on-Shannon so there’s a knock on benefit there, and still there was no support there during the pandemic, as I’m not a ratepayer”. 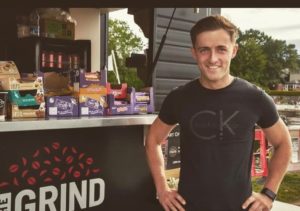 “I didn’t get any grant aid, I’m out there very early every morning trying to build up something and now as we come through the pandemic, this is a hammer blow, and I need people’s support in trying to get this decision overturned and to get back out there,” O’Neill said today.

“Hail, rain or shine, I’m out there keeping people going. There’s no easy or quick way to leave the N4 and duck into Carrick-on-Shannon if you need a coffee stop on the long drive, and people know they can pull in to me and get going again within five minutes. I’ve been out there throughout the seasons, in all weather. I’ve had the generator break down, and you just find a way to get it back up and running in 20 or 30 minutes and get back moving again. To me, this is just another setback, and one I’m determined to overcome – and the incredible amount of support I’ve received is only making me more determined.

“So far I’ve received hundreds of messages, over a thousand signatures on the online petition, lots of calls and texts, and people are sharing my Facebook post in huge numbers, so that’s incredible to see. I love what I do, and I just really want to get back out there again,” he concluded.

Filed under: Coffee, Lough Key, The Grind, The GRinds on the N4

INTO calls time on supersized class sizes in Roscommon

“The Grind” is back – in Carrick-on-Shannon!