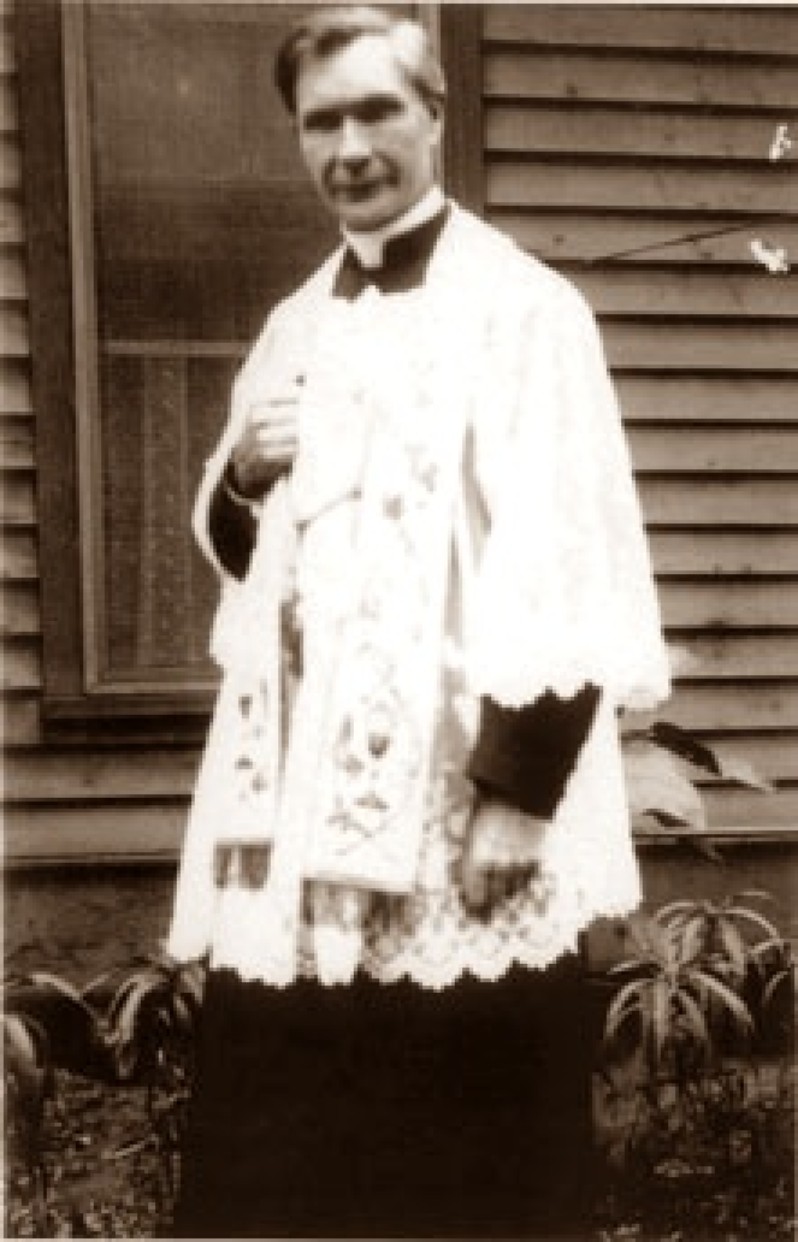 On the evening of August 11th, 1921 Father James Coyle was sitting on the front porch of his rectory in Birmingham Alabama, where he was reading a collection of prayers and Scripture. He’d been the pastor of St. Paul’s Church for seventeen years, and on the evening in question, he’d not long finished in officiating the marriage of Pedro Gussman and Ruth Stephenson. As Father Coyle was reading, Ruth’s father — a Methodist minister named Edwin Stephenson — approached the rectory on foot. After a brief exchange, Stephenson raised a pistol and shot Father Coyle three times. The Drum native died from his wounds forty minutes later. Although both Coyle and Stephenson were men of the cloth, they were of a very different vintage, conflicted not only in matters of faith.

The Roscommon-born James Edwin Coyle was ordained a Catholic priest in Rome in 1896 at the age of twenty-three, and began his clerical work in Mobile Alabama as a parish missionary. In the wake of the American Civil War of 1861-63, the Deep South began to see a period of industrial prosperity that attracted increasing numbers of European immigrants. Father Coyle’s initial missionary work was followed by a spell as a teacher and rector, before the death of Irish-born Father Patrick O’Reilly of St. Paul’s Church in Birmingham prompted the Bishop of Mobile to appoint Father Coyle in his place. It was the first major appointment for a priest with ambition. And while he eventually became a successful clergyman Father Coyle was also a prolific writer and poet, who had defended the Catholic Church, and Ireland, in letters to the editors of local Alabaman newspapers.

His killer, Stephenson, was a former barber who carried out his ‘ministry’ next door to St. Paul’s. Stephenson’s chief duty was as a ‘marrying priest’; performing wedding ceremonies and obtaining marriage licences for those of the ‘nativist’ Protestant faith. It was noted that Stephenson ‘hated Catholics’ and he was, fittingly, a member of the Robert E. Lee Klavern No. 1; the first Alabama chapter of the new Ku Klux Klan.

In the murder of Father Coyle Stephenson was manifesting a deep-seated hatred of ‘the other’, which included Catholics. But along with his established bigotry, this was an act of personal vengeance. In the quick aftermath of the killing, Stephenson walked ‘unhurriedly’ to the nearby courthouse and surrendered to police, stating ‘It’s all right gentlemen, I know what I’m doing’.

At his trial Stephenson admitted a personal rage towards Father Coyle, and told the court he had yelled at the priest on the evening of the 11th, ‘You have married my daughter to a n****r! You have treated me dirtier than a dog.’ Gussman was of Puerto Rican heritage and Stephenson cited the local law that considered anyone of darker skin — be it African American, Italian, Greek or Puerto Rican — as of inferior race. Such was Stephenson’s rage when he first found out about his daughter’s decision to take up with a Catholic Puerto Rican that he whipped her with a leather strap while his wife smothered her daughter’s screams. Undeterred, the determined Ruth attended secret classes in the Catholic faith while carrying on a covert relationship. On Thursday, August 11th, 1921, after failing to find a priest to marry them in the nearby town of Bessemer, both Ruth and Pedro decided to ask Father Coyle at St. Paul’s. After accepting the request (he had no legal reason not to) and procuring witnesses, Father Coyle told Ruth to inform her parents of her marriage immediately. But her father was already on her trail, and after Ruth fled with Gussman he made his way to the rectory of St Paul’s.

Despite the brutality of the murder many locals sympathised with Stephenson, helped no end by a widespread acknowledgement that Birmingham was ‘the American hot-bed of anti-Catholic fanaticism’ (according to Charles Sweeney of the 1920s Nation magazine).

The city was in the midst of a resurgence of deep-seated racism and xenophobia after a period of integration when immigrants — many of them Irish — in the post Civil War era streamed into Birmingham in search of work and the chance of prosperity. St. Paul’s church was the Catholic heartbeat of a thriving industrial city (steel and coal) with nationalist Irish clubs and societies, like the Ancient Order of Hibernians (A.O.H.) and the Irish Democratic Society emerging in the late nineteenth century. In his life in Birmingham Coyle had been, in the words of Alabaman historian Kay J. Blalock, ‘the city’s most outspoken Irish-Catholic priest’. The weeklong trial of Stephenson was a national sensation, headlining newspapers across the United States after reporters had flocked into Birmingham.

If there had been personal animosity in the murder the details of the trial catapulted the case into one of all-out sectarianism and racism. The Ku Klux Klan hired and paid a lawyer — the future Supreme Court Justice Hugo Black — to defend Stephenson, along with four lawyers who were all members of the KKK. The pleading of ‘not guilty and guilty by temporary insanity’ was argued on the grounds that first Stephenson had acted in self-defence, and secondly that his daughter’s marriage to a Catholic had driven him temporarily insane. The insistence of the defence that Gussman was of darker skin colour than white was part of their argument in justifying the murder. Ray Springle, in the Pittsburgh Post-Gazette, reported that the judge in the case, William Fort, as well as the Birmingham Chief of Police Thomas Shirley (who was called up as a star witness), and most of the jury were all members of the Klan. The inevitable transpired, and Stephenson was found ‘not guilty’ and acquitted, in a case that was called ‘a travesty of justice’ and has since been deemed to have been rigged. Though outspoken, and defiant, Father Coyle was unfortunate to have been living in a time and a place where ‘anti-Catholicism was rampant, and the Ku Klux Klan exercised tremendous influence’.

The event of Father Coyle’s murder and the prosecution has since been studied by historians and law students, with the United States Circuit Judge, William H. Pryor, stating in 2006 that the story ‘raises substantial questions about legal strategy, professional ethics, and morality’.

Buried at Elmwood Cemetery in Birmingham Alabama, the Roscommon priest is still remembered today by the ‘Father James E. Coyle Memorial Project’, which runs out of Birmingham, and whose aim is to promote ‘greater understanding, reconciliation, and peace among all of God’s children.’ It’s a timeless message and a fine legacy for a native son.