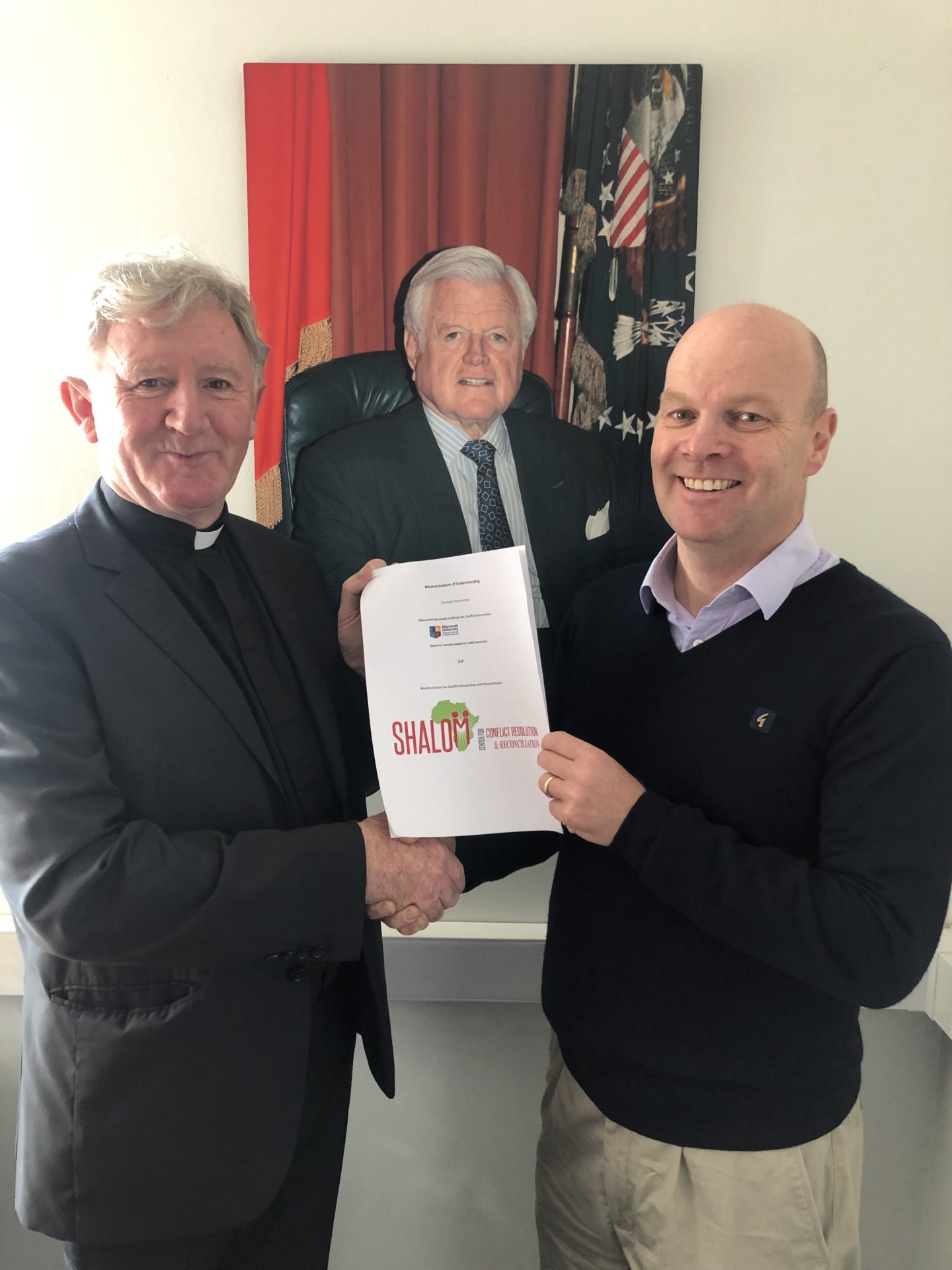 Fr. Padraig Devine with Dr. Kieran Doyle after signing a Memorandum of Understanding between Shalom and the Edward M. Kennedy Institute at Maynooth University.

Frenchpark-born missionary, Fr. Padraig Devine, Founder and International Chairman of the Shalom Center for Conflict Resolution & Reconciliation in Kenya, has been appointed to the first governing Council of Tangaza University College in Nairobi.

Tangaza College was established in 1986 as a constituent college of the Catholic University of Eastern Africa and has now gained university status. It has its roots in the Catholic tradition planted and nourished in Eastern Africa through missionary endeavours. Its student body are multi-ethnic and inter-religious from Africa and numerous other countries around the world.

Fr. Devine set up the Shalom Center in 2009. His efforts in peace-building started attracting international recognition when he was awarded the 2013 International Caring Award joining recipients that include the Dalai Lama, former US President Jimmy Carter, Mother Teresa and Senator George Mitchell. In 2014, eight countries in Eastern Africa presented him with the prestigious IGAD Award for his visionary contribution to peace and development in the vast region.

He has been a guest speaker at Harvard University, University of Austin-Texas, University of Houston, University of San Diego, DePaul University, the World Bank, the George Mitchell Institute of Global Peace, Security and Justice at Queens University Belfast, and the Edward M. Kennedy Institute for Conflict Intervention at Maynooth University where he is an adjunct faculty member and Honorary Senior Research Fellow.

At Tangaza College, Fr. Devine has been lecturing for over 10 years. Prior to that he served on the college’s previous board for 12 years and was its deputy chairperson. He holds a Doctorate of Philosophy in Political Science and Public Administration, a Masters Degree in Peace Studies and International Relations, and is certified in Corporate Governance Training.

Fr. Devine’s work in Africa began in 1988. After holding leadership roles in the Society of African Missions in Kenya and Tanzania, he served as Secretary-General and Chairman of the Religious Superiors’ Conference of Kenya which is comprised of 75 religious congregations with over 6,000 personnel in Eastern Africa. He was also a founding director of Pacis Insurance Company set up by the Catholic Church in Kenya in 2005.

Reacting to his appointment to the Council, Fr. Devine said: “I am honoured to be appointed to the first Council of Tangaza University College, and I look forward to contributing to its governance and administration. The mission of the college is to provide an all-round quality education in an environment which promotes freedom and responsibility, excellence in teaching and learning, research and scholarship, ethical and integral development in service to society. The college strives for the integral formation in the physical, intellectual, moral, social, and cultural dimension of its students. What I really like is that the skills of bringing about social transformation and justice for the poor and oppressed are integrated into every aspect of the educational process at the college.”

€54 hike in electricity bills is ‘unjustifiable’

Ten Covid cases in county in past two days