The Roscommon club championships so far – the winners and losers

No-one can say with any great degree of certainty that the local football and hurling championships here in Roscommon will be completed in 2020, but even if they are, a lot of clubs have already played half their championship season. So with two rounds completed, who are the big winners and losers so far?

Fergal O’Donnell has shaken up his team in terms of positional deployments and brought in a couple of relatively unknown young players, and it’s been so far so good for the Frenchpark club. Defensively they’ve conceded 0-17 in two games, goalkeeper Aaron Dowd and corner forward Luke Hester have been in outstanding form and justified the trust shown in them, and barring a shocking result against St. Croan’s in their final game, they’re going to win their group and be seeded in the quarter-finals.

It’s not that a draw with Clann and a four point win over Strokestown are sensational results, but it’s more about how they’ve come about. With probably the youngest team in the senior championship they’ve produced some sensational attacking football, picking off fabulous scores and playing at a very high pace and tempo. They’ve got a lot of options off the bench and while it’s still likely that their lack of experience will tell at some stage in 2020, the potential for another decade of dominance for the Kiltoom club is very real. 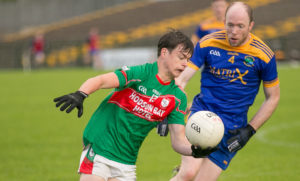 Drawn into what looked like a very tough group, they’ve breezed through what most people would have expected to be very tough games against Kilmore and Castlerea St. Kevin’s. Their fast and fluid attacking style appears to have come through the long shutdown unscathed, while Darragh Walsh is quickly starting to live up to the very high expectations that were placed on him as a result of some exceptional underage performances. When we consider how other intermediate championship contenders like Éire Óg and St. Faithleach’s endured real wobbles in round two, Oran are the team in form in that grade.

Let’s face it, no championship season in Cootehall can be seen as too bad if it involves a victory over St. Ronan’s, and with that local derby win behind them they’ll feel that they can finally turn a corner and start thinking about winning a junior title. Fiachra Henry looks like a real star in the making too, a player that will be incredibly hard to stop in this competition.

Walking off the field after last year’s semi-final defeat to Four Roads, it looked like a long hard road was ahead for the Woodmount men in terms of getting back into championship contention. Admittedly a landslide win over a dreadful Oran side doesn’t indicate much in itself, but the return of Daniel Glynn, a visibly positive response to the management of Shane Sweeney and some improved performances from other younger attacking players bodes well. Tomorrow evening will tell a lot about where they really stand. 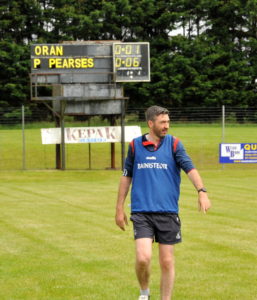 So far so good for Shane Sweeney

With one round of group games to go, they are the only team in the senior or intermediate football championship that are mathematically eliminated from contention, or alternatively, the only team certain to be involved in a relegation playoff. That’s a little unfortunate in that they didn’t play particularly poorly against either Elphin or St. Brigid’s, but in both cases got undone by a lack of firepower and a lack of reserve strength. With so many good players in the squad, it’s more than a little disappointing for all involved.

It’s not that they won’t play knockout football – they almost certainly will. It’s not that they’ve become a poor team overnight, they absolutely aren’t. And their one defeat – to a good Western Gaels side that played very well on that Saturday afternoon in Lisnamult – would probably have been at worst a draw were it not for Aaron Dowd’s remarkable save to deny Peter Gillooly. However they just aren’t getting any better, and they needed to. There are one or two weak spots in the team that haven’t been addressed, and now they’ve to deal with the loss of Scott Oates as well.

Relegation to junior football is now being talked about in the town, but realistically they’d have to fall a lot further to get to the point where St. Barry’s or Ballinameen might be able to beat them in a one off game. Nonetheless there’s no masking the fact that  they weren’t just beaten in their first two championship games this year, they were crushed. Every player involved knows it, and in a town that has a long and proud football tradition, that’s not easy to handle. There are some talented young footballers in St. Kevin’s, but the club will have to get things sorted out soon or else some of those players will start to think about whether there are more enjoyable ways to spend their time and energy.

The St. Kevin’s team that took on Éire Óg

Taking a heavy beating from St. Dominic’s was one thing, as Dominic’s look like a side that is on the up. Shipping another hiding from Shannon Gaels, a club that were clearly – but only slightly – better than Ballinameen in round one is a huge worry. A couple of key injuries have ripped the heart out of the Tarmonbarry men, and if they don’t salvage their season next time out, it’s hard to see them avoiding the drop to junior.

Not unlike we did with Pearses hurlers, we’re doing a lot of reading into one game here – but it’s not just about the desperately poor performance, it was about the marked absence of so many good hurlers from their side. It’s natural that right now, football is a much more alluring draw in the club, but they need to get a lot more of their better players onto the field. At underage level, the club is in crisis, unable to field teams at any age group beyond U-12. Roscommon simply can’t afford to let another hurling club slip away into irrelevance, and it is happening.