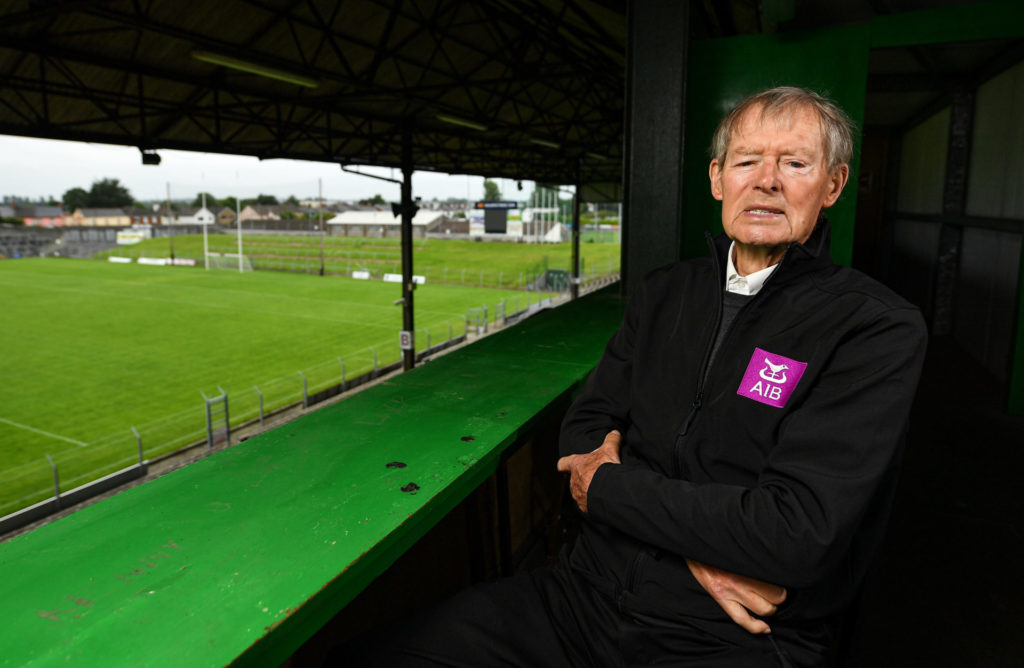 GAA commentary legend Mícheál Ó Muircheartaigh is pictured ahead of Episode Four of AIB’s The Toughest Summer, a documentary which tells the story of Summer 2020 which saw an unprecedented halt to Gaelic Games. Picture: Seb Daly/Sportsfile

Ahead of the release of the latest episode of AIB’s The Toughest Summer, legendary GAA commentator, Mícheál Ó Muircheartaigh, takes a trip down memory lane, chats about his coaching credentials and reflects on what he has been thinking about during the pandemic…

Mícheál: There is a story attached to every game. The one I think of more often than others though would be the National League final of 1956.

At half time in that game, Wexford were 14 or 15 points behind. I was watching that match under the Cusack Stand near Hill 16 and people were saying they had got an easy All-Ireland last year.

The second half started — and when the game ended, they were ahead. ‘Twas a game I’ll never forget. They had proved they had won a real All-Ireland the year before. They went on to have a wonderful final in the championship later that year, beating Cork. Christy Ring with his eight All-Ireland medals.

What will stay with anyone who saw it, was the wonderful thing the Wexford backs did that day. The final whistle blew and Mick O’Donnell and one of the Wexford players went straight towards Christy Ring. Nowadays players run to their colleagues, but they went towards Christy Ring and they lifted him on their shoulders. That was respect for a man that had won eight All Irelands.

Wexford had two at the time. That was a great gesture of sportsmanship.

Mícheál: It was Gerald McKenna who was chairman of the county board at the time and he asked Mick O’Dwyer would he be manager of the team, and he rang me to ask would I look after the guys in Dublin.

What I concentrated more on was maybe people who were a little bit slower, to get them to be able to break, like the horse or greyhound that comes out of the box. A run for a ball is not a long run. If you get 2 or 3 or 6 inches ahead of anyone it would take a while before they get onto you. We trained them to be ready, to be sharp, almost ready to break at the same moment that the referee is about to blow the whistle. We did a lot of that.

We concentrated on accuracy and being ready for the moment and above all, to be fresh on the day, feeling good.

I remember a Dublin footballer, Cathal O’Leary. He was a wonderful footballer. He used to love playing at midfield against Mick O’Connell because they both went out with the object of winning that ball.

So, you learn little things like that you know to ease off, be ready, feel good, look forward and hope — and leave it to that.

Q. During lockdown did you spend time reflecting on things like your favourite matches that you’ve been to? Did you reflect on your own career?

Mícheál: One way or another the occasion would come when your mind would go to something.

I thought about the All-Ireland final in 1910 that Kerry qualified for against Louth. Then suddenly Kerry said we’re not playing; they wouldn’t play in that final. Their grievance at the time was that great southern railway refused to put on a train that would bring the Kerry followers to Croke Park and there were very few cars in Kerry or any place in those days. So, they said they would not play.

What could Louth do only stand idly by as they were presented with the title that year? They’d have much preferred it if they had won it on the field, but they won it that year. Louth were great footballers in certain years and that was one of them. The following year there was a train and maybe a second train if it was available.

Things like that, you think about them and I often think of an occasion when a team won for the first time. Take Down for instance, they won the Ulster Championship for the first time ever in ‘59. Nobody in their wildest dreams would think that the following year they would win the National League and win the Ulster again and go on to beat Kerry in the All-Ireland final. A year earlier, they hadn’t even an Ulster championship to their name. At the end of 1960 they had an All-Ireland senior medal, they had the National League medal they had the Ulster championship and so on.

So, you think on moments like that and you could get them in any county.