Having seen off the challenge of local Cork side Colaiste Choilm from Ballincollig in the morning semi-finals, with Thomas Higgins securing the crucial point after Fionn Hoare and Cian O’Connor delivered landslide wins after 13 and 10 holes respectively, CBS Roscommon came up against formidable opponents in the Royal Belfast Academical Institute in the final. The Ulster side had ousted Blackrock College from Dublin earlier in the day.

In the afternoon final Hoare put a point on the board early on for Roscommon, with another 6&5 win, this time over Michael Glasgow. Alan Connaughton added a second point with victory over George Craigan 4&2 while wins for Simon Walker over Darcy Hogg (19th) and Cian O’Connor (2&1) on Robert Craigan closed out the victory by four matches to one.

Mark Hodgkins, Golf Co-ordinator in CBS was delighted afterwards and credited the success of the team to parents and Roscommon Golf Club.

“There’s a big sporting tradition in the school, between football and lots of other sports. This has come on a long way in the last few years and obviously golf has become really successful in the school over the last four or five years. We have to credit the parents really and the local club for the success that the team has had.”

Earlier in the day St. Colman’s College from Fermoy claimed the Junior title on a score of 75 points, one clear of Garbally College in Ballinasloe. 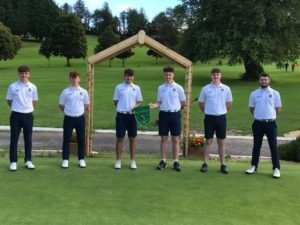