St. Aidan’s became the eighth and final club to secure their place in the Roscommon IFC quarter-final line up thanks to an 0-12 to 0-6 win over Ballinameen at Strokestown tonight, in a game played in dismal conditions at Strokestown GAA club.

The Ballyforan-based club won both halves of the game by 0-6 to 0-3, the first half the more impressive of the two as Ballinameen played with the aid of the elements in that period. Three points from veteran Terence Kelly and excellent scores from clubs minors Ciarán Fallon and Adam Cummins helped build up the St. Aidan’s total, but equally significant at the other end was a crucial save from James Kenny to deny James Tansey of Ballinameen a vital goal. 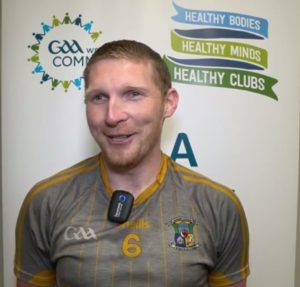 Shane Byrne struck three second half points from midfield for the winning side.

Two frees from Peter Keane in the third quarter cut the gap back to the bare minimum but two incredible long range strikes from Shane Byrne pushed momentum back the way of the favourites, and they pushed out their lead in the closing stages to secure the win.

St. Aidan’s now become the fourth unseeded team in the quarter-final draw and can be paired up with any of Oran, St. Dominic’s or Kilmore in the next round.