Long before the nation’s sense of solidarity was shattered into pieces this week by the combined force of 81 figures of influence pounding at it with drivers and four irons, the cracks were already starting to appear. The government’s updated guidelines for what was and wasn’t acceptable, issued late on Tuesday, were riddled with inconsistencies. The general public could understand exceptions being made for schools, as society simply cannot continue to function remotely normally if parents have to be home with their children around the clock, but the magical powers granted to wedding ceremonies and masses to protect 50 people from Covid-19 transmission didn’t quite sit well with people.

In GAA clubs, the anger was even more palpable. Already a large number of supporters had been denied the simple pleasure of keeping an eye on their local clubs playing championship fixtures, with the more addicted ones at least able to give themselves a slight methadone shot in the form of a junior, minor or U-14 game. Then a limit of 200 people (effectively 100 people along with players, management, stewards, officials etc.) was cut to ‘behind closed doors’ and people’s patience snapped entirely. 50 people indoors for certain things, or even 50 people on public transport, was deemed okay, but 50 people on either side of a 150 metre long playing field isn’t?

Admittedly the public transport thing didn’t occur to a lot of people, for obvious reasons.

Then on Wednesday night, the sheer lunacy of it all became clear at an intermediate championship playoff in Strokestown. One of the players, still in his last year of minor, was brought to the game by his mother. She was not allowed in to watch the game, so had to follow it on facebook in the car park, outside the ground. Have a look at the side of the ground opposite the stand and see if you think there might have been room for her, or many more like her.

Then this week a remarkable thing happened. The GAA issued updated guidance, officially pertaining to underage fixtures, that appeared to suggest pushing back on the updated government guidelines. They gave their blessing for one parent of each child to attend games, with the following wording:

While we await further clarification on the issue of parents attending juvenile games we suggest that one parent or guardian may attend a game where they consider it necessary for the welfare of their own child.

A day later, the following was part of the communication received by GAA clubs: 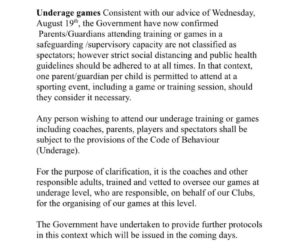 In a nutshell, the government had issued certain guidelines, the GAA had pushed back and said that in this area, they were only going to come so far, and the powers that be duly acceded. In terms of a change of tone, it was momentous. Let’s not forget that this is the same association that shut down all activity before the lockdown. When the former Taoiseach, Leo Varadkar, suggested a date when games might resume, or that an All-Ireland championship might still take place, GAA president John Horan responded by saying that the association would go back to playing games when they felt it was safe for their members and patrons, but not before.

Having taken an even more conservative approach than national authorities, and then turned their energy to looking after their local communities, the GAA, in conjunction with the LGFA and Camogie Association, this time the GAA had made it clear that they felt victimised. Their decision to name Dr. Ronan Glynn in a public statement met with a mixed response and no small amount of negative feedback, but the situation remains the same. NPHET and the government have still not shared any empirical data that has attributed any existing cases of Covid-19 to community transmission in an outdoor setting, let alone a GAA one, and the general mood in the GAA community is one of deep skepticism with regard to the motivation behind these new protocols.

All of this has of course been overshadowed by events in Clifden, where powerful and influential figures in Irish society gathered to play golf, to eat dinner in a large group, and to pretend that a partition between the room would be enough to circumvent national legislation. Today’s piece from Aoife Moore in the Irish Examiner (link here) accurately sums up the disconnect that now exists between a government would stop a mother from standing on the edge of a football field to watch her son, with nobody standing even the width of a tee box away from her, but will still try to declare that we’re all in it together.