Some Roscommon interest across the Shannon this weekend

With just the one senior football match down for decision in Roscommon this week – the playoff clash between Michael Glaveys and Elphin at Abbey Park on Sunday – some of the focus at the southern and central part of the county will turn to big games across the Shannon in Leinster, where Roscommon managers face into crucial fixtures.

Arguably the biggest one is in Tang this evening at 6.45, where Caulry meet Athlone in the final round of group games in the Westmeath SFC.

Athlone, with former Roscommon and St. Brigid’s selector Liam McHale at the helm, suffered a narrow defeat to Garrycastle in the first round of games, and then they played host to the fixture between Garrycastle and Caulry, where the county champions romped to a 5-11 to 0-5 win, with Ger Heneghan involved for Garrycastle.

That result means that Caulry – under the guidance of Sean Kelly of Padraig Pearses – need a win to secure the second quarter-final slot, while Athlone will advance to the quarter-finals if they secure a draw.

“I am glad that we had a three week break since our opening fixture as it allowed us to work on certain aspects of our performance against Garrycastle with which I was obviously not satisfied” McHale said earlier this week.

“Training has been extremely competitive and although some players have injuries with which to contend, we have a panel of footballers which I believe can help us achieve our goal on Saturday evening”. 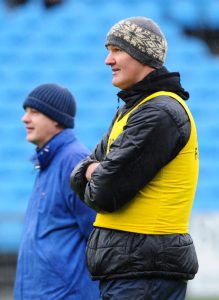 Liam McHale will take charge of Athlone against Caulry tonight.

A very interest spectator – though presumably on Iarmhí TV as opposed to in person, due to current regulations – will be former St. Brigid’s and Roscommon star Frankie Dolan, who oversees Rosemount. Rosemount will play either Athlone or Caulry in the quarter-final.

It’s a big weekend too for another Kiltoom man, Noel O’Brien, although anything bar a heavy defeat for his Longford Slashers side against Carrickedmond will see his players advance. Given earlier results, even an eight-point defeat would keep them on top of their three-team group and on course to try and return to the county final, where last year they lost to Emmet Óg Killoe in O’Brien’s first season in charge.

Throw in for that fixture in Ballymahon is at 5 p.m..

Strokestown native John Rogers is in charge of Clonguish, but they are in the same group as champions Killoe, who have been subjected to a controversial 48-week suspension of all club activity, so they will advance unless that sanction is overturned.

Meanwhile in the intermediate grade, Ray Curley (St. Faithleach’s) is in charge of neighbouring club St. Brigid’s of Killashee, and with two wins out of two, they will play Ballymahon on Sunday afternoon at 2 p.m. to fight it out for top spot in their group.