Oran and St. Dominic’s qualified for Saturday week’s intermediate championship final in very contrasting styles today, as Oran crushed St. Aidan’s by 4-16 to 0-4 in the first of the two semi-finals, before St. Dominic’s held off a late rally by St. Faithleach’s to upset the Ballyleague men by 1-9 to 0-10 in the second fixture this evening.

Oran wasted no time in setting out their stall against St. Aidan’s as an early Kieran Whyte goal put them on the front foot. Thomas Featherston and Cathal Kenny hoovered up a world of ball in front of their own full back line throughout the half, starving Terence Kelly and Cathal Dolan of ball, before Kenny came up trumps with a goal with the last play of the first half to make it 2-7 to 0-3 at the interval.

St. Aidan’s attempted to rally after half time but their task was made tougher by playing into the wind and Oran soon stretched the lead, with Paul Kenny making a strong case for final selection as he kicked three points from play following his introduction in place of the injured Jack Earley. Jack Gunning and Charlie Carthy took advantage of defensive errors from St. Aidan’s to rattle in late goals and put further distance between the sides on the scoreboard. 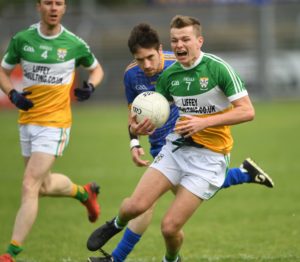 It was a much tighter affair in the second tie where St. Dominic’s shocked the county and St. Faithleach’s by moving out into a 1-6 to 0-0 lead, before Cathal Gunn kicked St. Faithleach’s only point of the first half in the sixth minute of stoppage time to reduce the gap to eight at the interval.

Darren Donnelly’s penalty goal gave St. Dominic’s a huge boost early in the game while their half-back line of Jack Lohan, Eoin McCormack and Brendan O’Meara were in superb form. St. Faithleach’s for their part never recovered from the early loss of Diarmuid Murtagh through injury.

Ciaráin Murtagh attempted to carry the fight to St. Dominic’s in the second half and they gradually ate into the lead, particularly in the final quarter when they outscored the winners by 0-6 to 0-1, but indiscipline continued to haunt them as they lost Stephen Ormsby and Colm Mangan to red and black cards in the closing stages, leaving them with just 13 men on the field as they tried in vain to chase down a winning goal.

For full reports on these games and all the action in the Roscommon championships over the weekend, be sure to check out Tuesday’s Roscommon Herald.