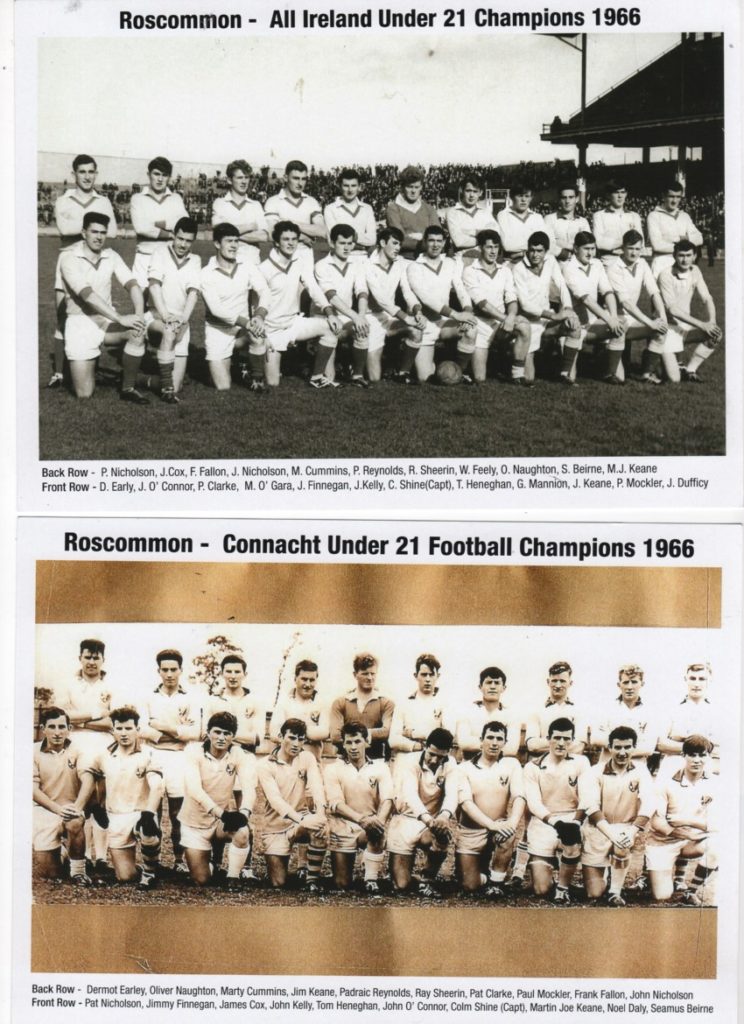 The following interview was conducted by Mick Rock with the late Jimmy Finnegan, RIP, this summer in connection with a collection Mick and Paul Mockler are assembling based on the Roscommon All-Ireland winning U-21 team of 1966…

One could be forgiven for speculating that Jimmy Finnegan might not be in the most reflective or optimistic of moods in the midst of a pandemic and having just endured an “annus horribilis” health-wise.

But nothing could be further from the truth.

His recollections of the past are sharp and his views on the present and future are positive.

“I’m over the worst, health-wise and keeping myself safe from the virus. I’m looking forward to a better year ahead,” he said.

Back in 1966 Jimmy was acquiring his nursing experience in St. Ita’s, Portran. He had been a county minor since 1963 and had already featured on the senior team in a league game in 1964.

His interest in football had been fostered in school in Ballintubber, by school Principal Pat O’Gara.  He remembers Stephen Treacy dropping two footballs into the school to keep them occupied.

He had played with St. Croan’s, though not strictly legal, and had already moved to the Castlerea club by 1963. He progressed naturally from minor to U-21, and was greatly influenced by the likes of Jimmy Murray and especially Donal Keenan — legends of All-Ireland fame who were regularly encouraging them.

These men taught him to use his weak foot “if it was only to kick it out of your way”, a tactic that stood him in good stead in the All-Ireland U-21 final.

His memory of the campaign of 1966 is a mixture of snippets he recalls and bits he has been told or read since.

The course of games is sketchy, well over half a century later, but he mostly remembers his colleagues and their exploits.

First up was Galway, in St. Coman’s Park. Not much was expected of Roscommon, but they won “easily enough”, despite the presence of All-Ireland senior winner Jimmy Duggan in the Galway team.

Leitrim, in Carrick, was a lucky escape, a game Roscommon could easily have lost, just getting on top by a single point.

He doesn’t remember much of the Connacht final against Mayo except that J.J. Cribben (who died just before this interview) was in the Mayo team. There was no fuss after the win, a small crowd of mainly family and club mates of the team members.

The semi-final against Donegal was in Ballybofey and they stayed overnight in Jackson’s Hotel. He remembers a strong wind, a lot of Roscommon wides and a goal from Tom Heneghan. He also remembers that Mickey McCloone needed a lot of watching, and that Pat Nicholson, assisted by Pat Clarke and Colm Shine, made sure that he got it.

Even before the All-Ireland there wasn’t a lot of collective training. He trained in Portran, cycled a lot and played for a team of priests, incognito, one of whom was Fr Des Dockery.  What collective training there was mainly playing football. Donal Keenan was astute, never raised his voice, but passed on nuggets of wisdom, including info on the opposition.

Kildare, their final opponents, were highly rated, most of them with senior intercounty experience. While no one else gave Roscommon a chance, the team were not over-awed.  They had their own quite confidence and determination, a mixture of experienced older lads and talented “young guns” like Dermot Earley and John Kelly.

Jimmy remembers scoring the first point — well you could hardly forget your first score in Croke Park in an All-Ireland final!  He got a break from the throw-in, space opened up for him and he scored, even from the “wrong” side of the pitch.

He recalls Kildare being very dominant as the game progressed, but that massive displays and huge determination yielded two goals in the closing stages (one of which he scored himself). He has memories of a big crowd coming onto the pitch after their one-point win.

He was due to work that night in Portran, but a colleague offered to take his shift, so he remembers the aftermath, the return home, especially Boyle and Roscommon.

“There was very little drinking involved. We didn’t have the money, I guess”, he recalled.

Jimmy’s playing career continued apace. He played senior for Roscommon right up to 1976, “just before the four-in-a-row”. He captained the team in 1968, treasures the Connacht final win in 1972 and bemoans some narrow defeats in subsequent years when, in his own words, “we weren’t far off”.

In between he had a stint playing for London while advancing his nursing career and won a junior All-Ireland with them against Kildare in 1970, though he missed the final having broken his leg — an injury that kept him out of football until 1972.

He also contributed handsomely as a coach, administrator, and trainer with clubs and county at nearly every grade, a highlight being his stint as part of John Tobin’s Connacht winning team as a selector in 2001.

Now retired and recovering after his brush with cancer, he has a bucketful of recollections, none more precious than the famous U-21 All-Ireland of 1966.

It’s really about memories, the colleagues you played with and against, and the esteem you were, and are, held in by your county’s followers,” he remarked.

“Mary has it carefully put away in a box,” he quipped.

Treasure it, along with those memories.