Lecarrow Lazers set off on their Malin to Mizen journey 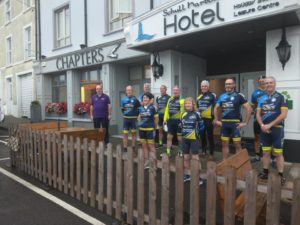 Members of the Lecarrow Lazers Cycling Club have just begun their mammoth fundraiser from Malin Head to Mizen Head, a journey of almost 600kms. The intrepid cyclists are raising money for local charities the Darragh Kenny Memorial Fund and the Ballyleague Lough Ree Access for all Boat.

The cyclists set off from Schull County Cork this morning on the first leg of their four-day journey. Their target is to raise €10,000, with more than €3,000 already raised.

The Darragh Kenny Memorial Fund was set up in memory of Lecarrow man, Darragh Kenny, who was just 28 when he passed away suddenly in 2013 from cardiac arrest.

A keen sports participant, he played soccer for St John’s Athletic FC in Lecarrow, and in his childhood years, he played Gaelic football and hurling for St Dominics GAA club. The son of Liam and Fidelma, he was also a well-regarded member of the Irish Prison Service, where he worked in Dublin.

In his memory, the local Lecarrow Lazers Cycle club and many others have held a series of memorial cycles over the last number of years. More than €90,000 has already been raised for Croí, the Heart & Stroke Charity, in the fight against heart disease and stroke.

The Access for All Boat will be used to transport wheelchair users from all over the country around the Roscommon lake and further afield.