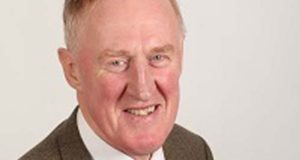 A Roscommon doctor who claimed that the coronavirus was “much less severe” than the flu, has resigned as Clinical Director of the Dublin Midlands Hospital Group. Dr Feeley, a former vascular surgeon, made the claims in The Irish Times at the weekend.

“The Hospital Group would like to sincerely thank Mr Feeley for his contribution to the strategic development of the Hospital Group since its establishment and his work as a Group Clinical Director for the last 5 years,” the spokesperson said.

The Irish Times is reporting today that after his public comments, he came under heavy pressure from HSE management, who told him his position was untenable. It is also saying he stands by his comments, but decided to resign so management in his hospital group would not be penalised.

In Saturday’s Irish Times, Dr Feeley criticised what he viewed as “draconian” restrictions that he felt were no longer justified in the fight against the virus. He suggested that people at low risk from the virus should be exposed to it so they could develop herd immunity and reduce the risk to vulnerable groups.

Dr Feeley went on to say that assessing Ireland’s strategy of minimising the impact of the virus should take into account the cost to people’s quality of life. He added that the financial cost can be seen with “any walk or drive through cities, towns and villages.”

He was also critical of the media and the public “obsession” with daily case numbers, when so few people are being admitted to hospital or intensive care units. He argued that current deaths reflect the disease was much less severe than the average flu.

He said the reporting of these daily case numbers and deaths “borders on hysteria” and was “scaremongering”.

In response, the HSE disassociated itself from the remarks made by Dr Feeley and said they were not the views of the national health body.

The HSE’s chief clinical officer, Dr Colm Henry rejected the suggestion from Dr Feeley that healthy people should be allowed to get the disease to encourage herd immunity.

He said the disease had the power to “overwhelm healthcare systems and lead to large-scale illness and death, particularly in vulnerable populations.”

He went on to say that the World Health Organisation had not yet established whether herd immunity is possible with the coronavirus.

“The most effective way of protecting older people and vulnerable groups is not by expecting them to protect themselves, but by everybody adhering to the public health advice, which will limit transmission of the virus between individuals and households,” Dr Henry added.