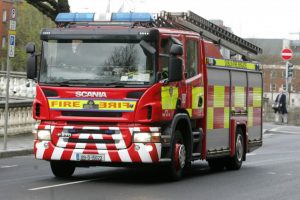 Athlone Fire Service attended a blaze in South Roscommon in recent days which saw hundreds of bales of hay destroyed. Machinery and livestock were also lost in the fire.

On Friday last, September 11th, the fire service responded to hay shed on fire in Newtownflood, Crannagh Beg at approximately 3pm. Two crews from Athlone attended the incident for around three hours.

When they arrived they found the shed well ablaze. 300 bales of hay, two mowers, and a sprayer were destroyed. Two calves were also killed and the roof collapsed.

No other properties were damaged.

The Gardaí were also at the scene as were ESB personnel who attended to disconnect the power to the shed.